A SELECTION OF PORTRAIT IMAGES 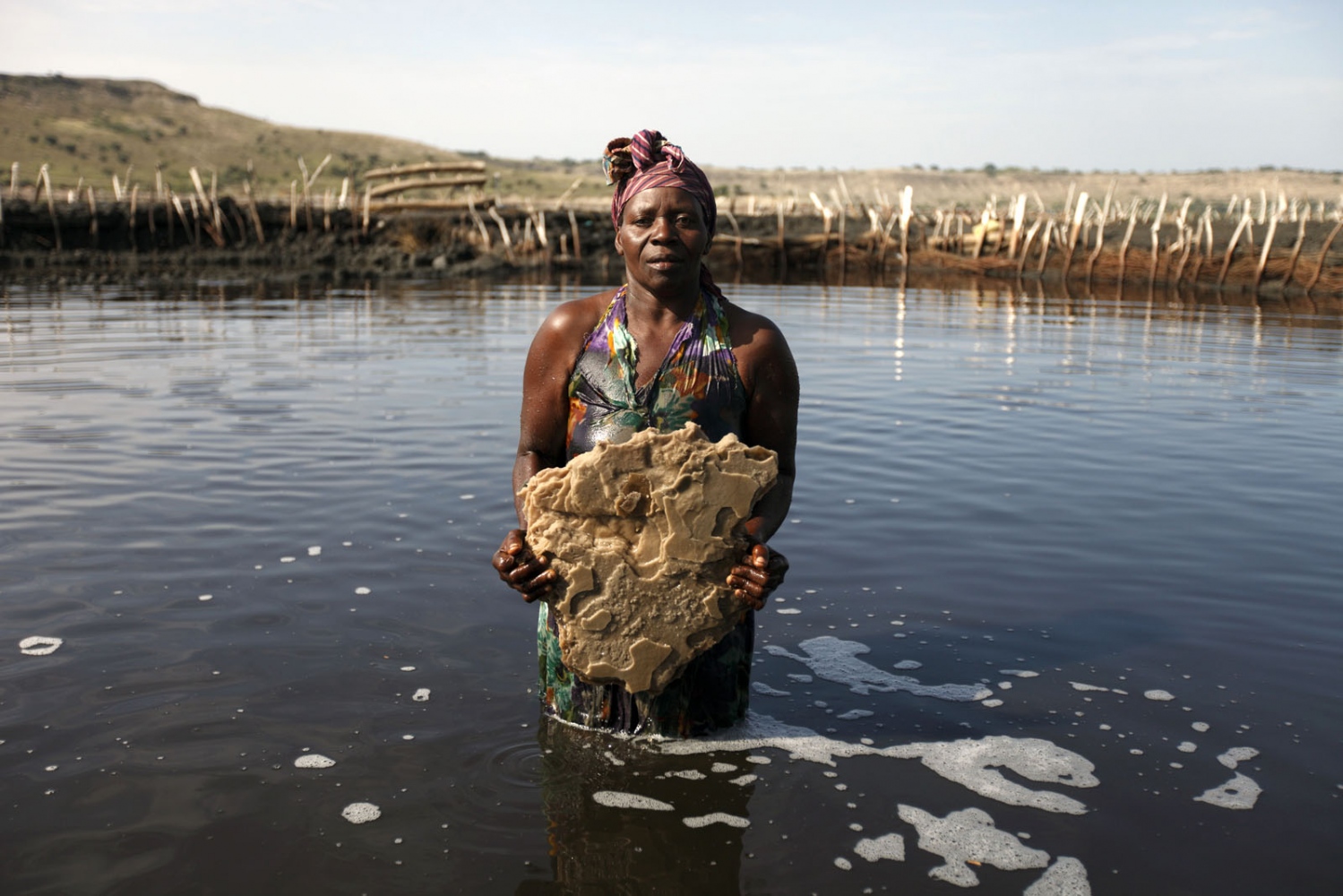 A salt worker holds a huge slab of salt she pulled out of Lake Katwe in Western Uganda. The lake sits in an extinct volcano and the salt forms at the bottom of the lake where it must be broken in to manageable sized pieces and brought to the surface. Katwe, Uganda 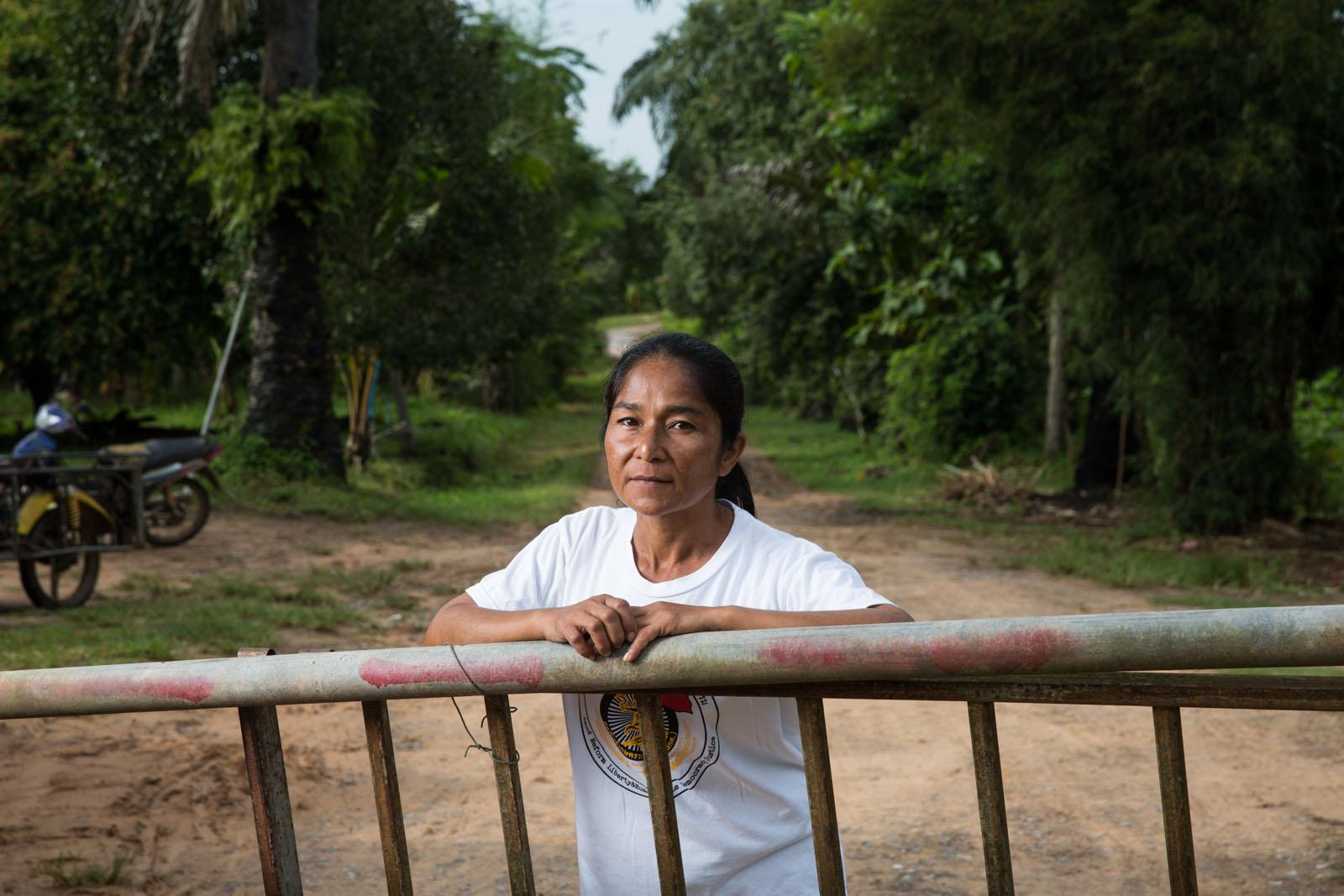 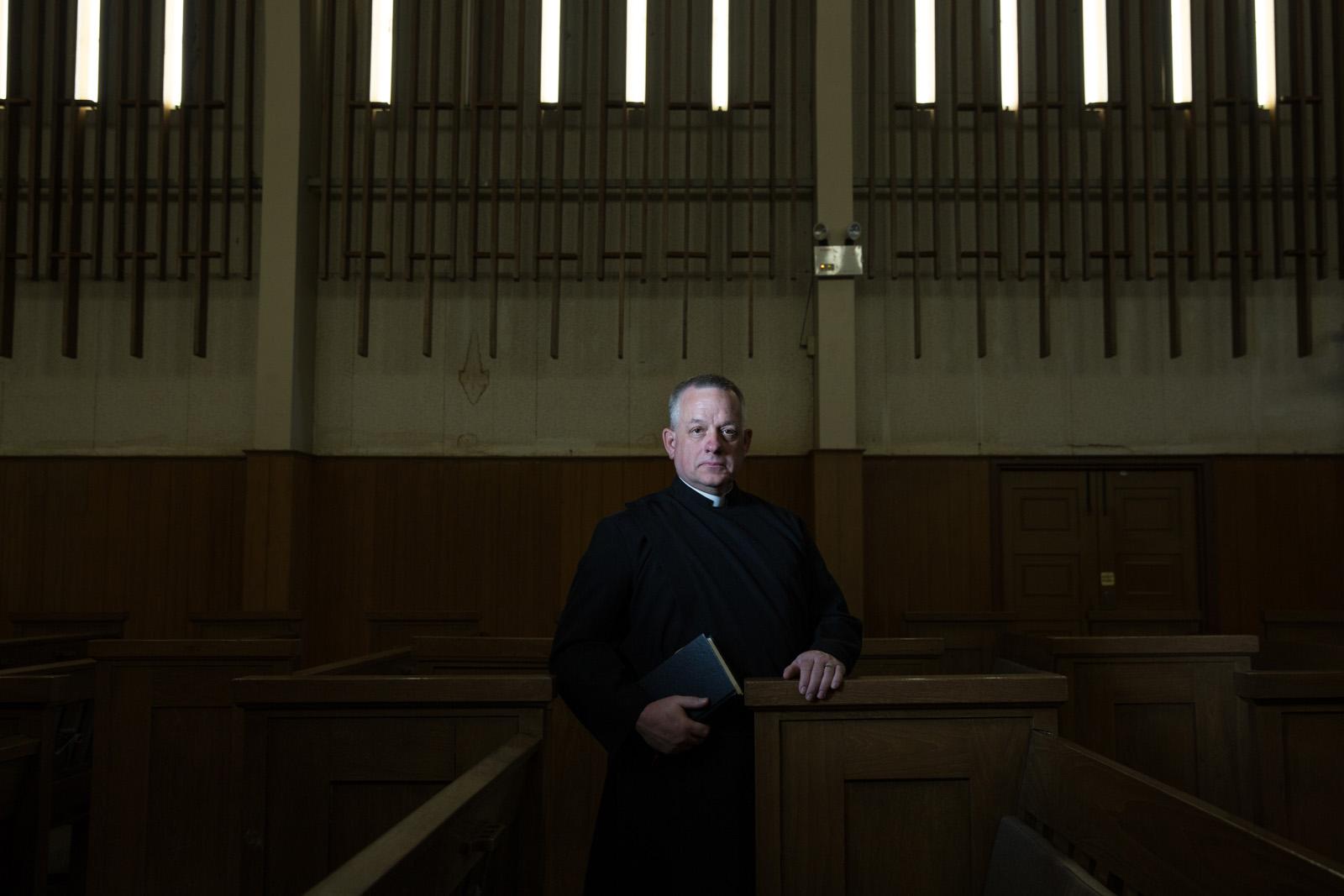 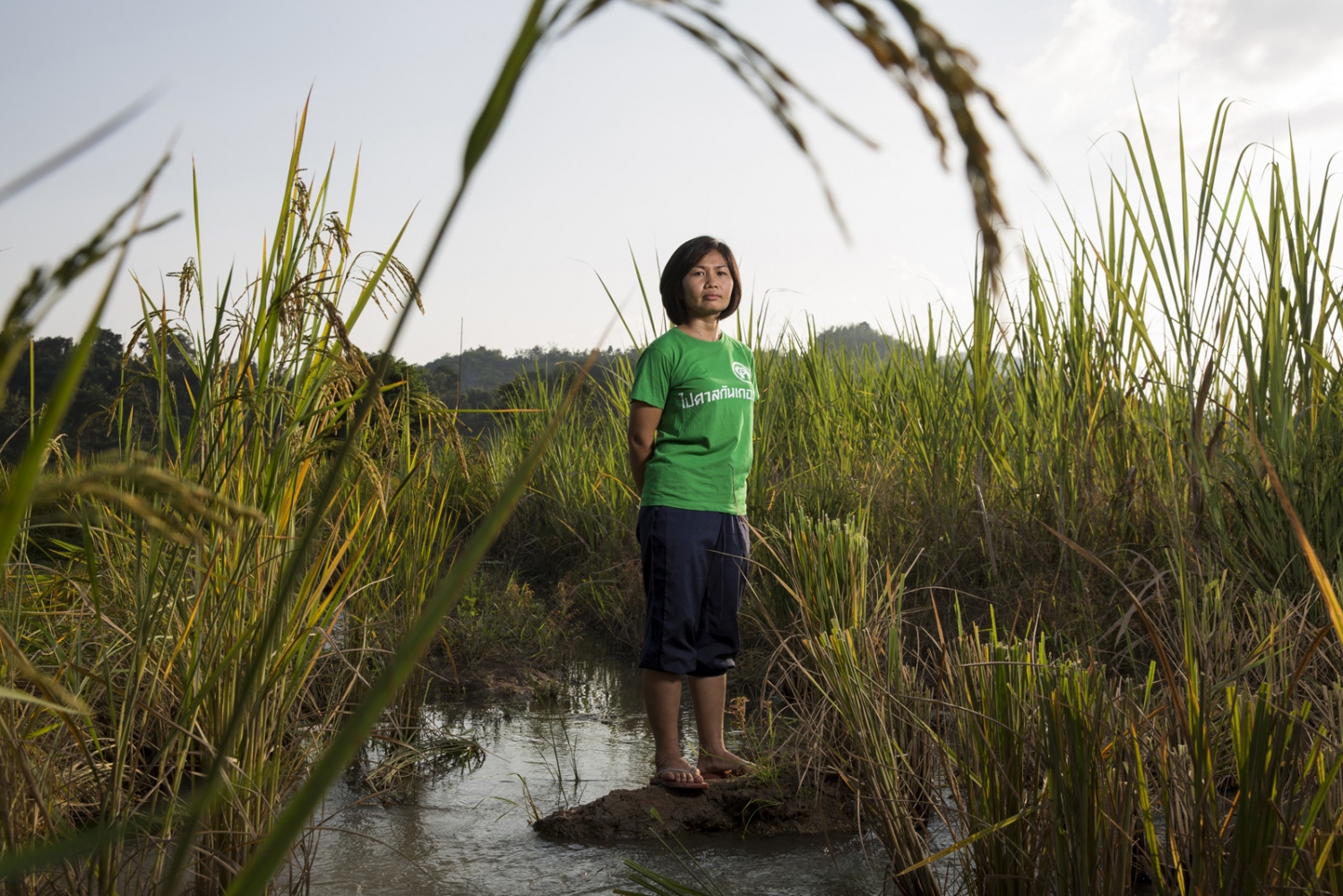 Patanaporn Kengchamba stands in a rice paddy in the village of Na Nong Bong in Loei Provinces Wangsapung District. The mountains behind her are the location of a gold mine that the villagers allege continues to contaminate their water supply and affect their crops. 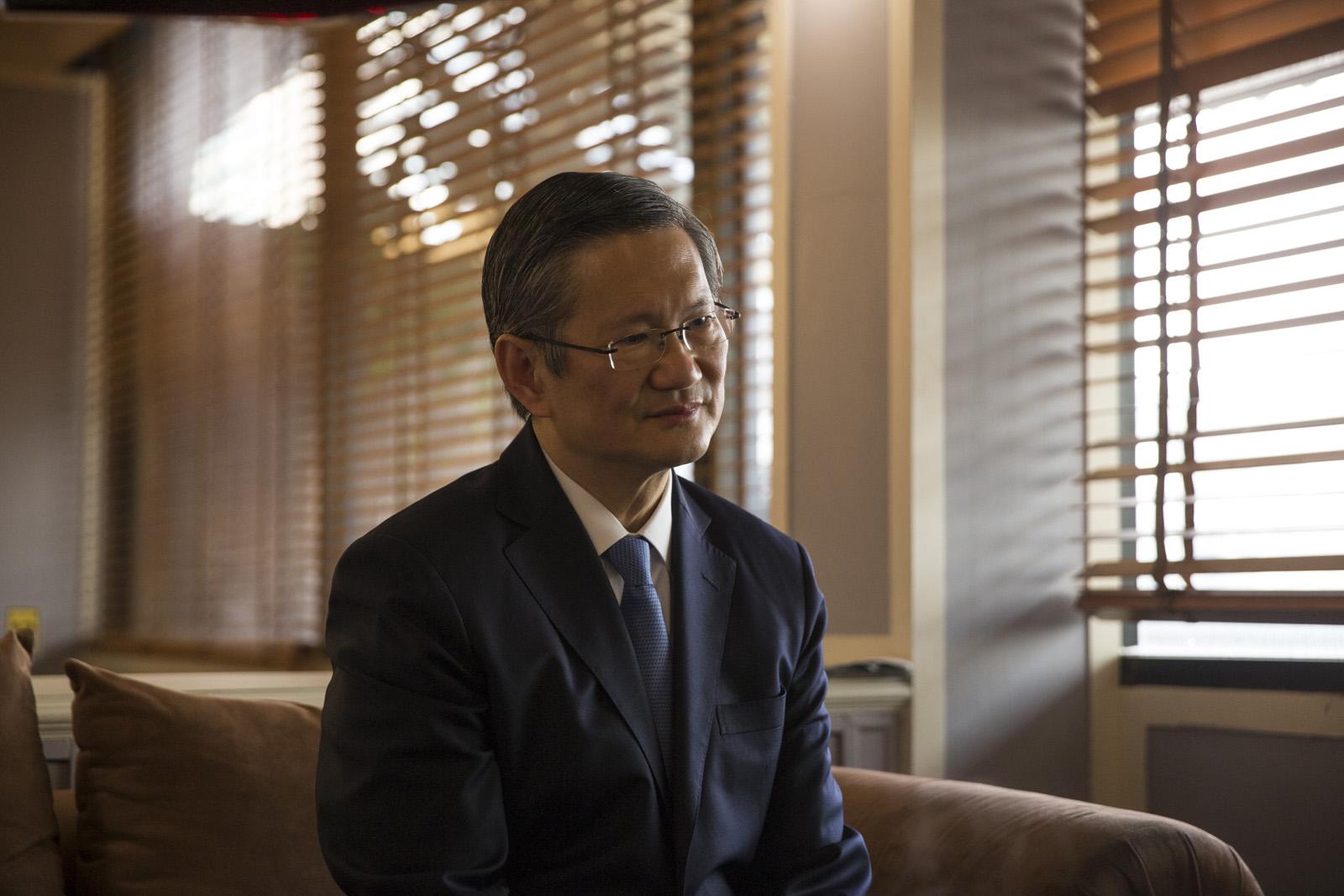 Chartsiri Sophonpanich, president and grandson of the founder of Bangkok Bank. Bangkok, Thailand. 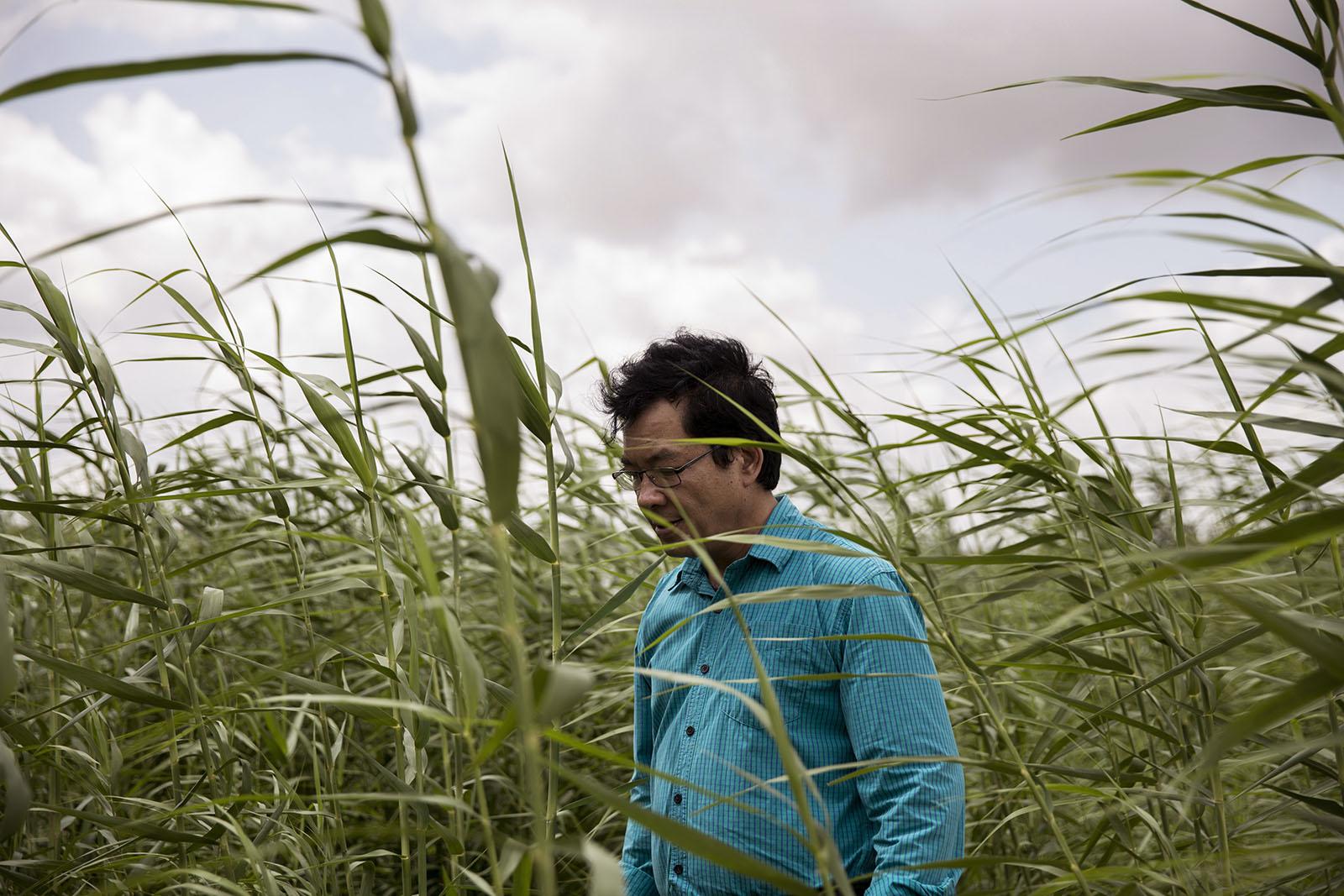 Independent Vietnamese ecologist Nguyen Huu Thien, walks through a wild yet soon to be developed island close to Can Tho city, Southern Vietnam. He is a leading expert in the ecology of the River Mekong and previously a member of the Mekong River Commission. Can Tho, Vietnam 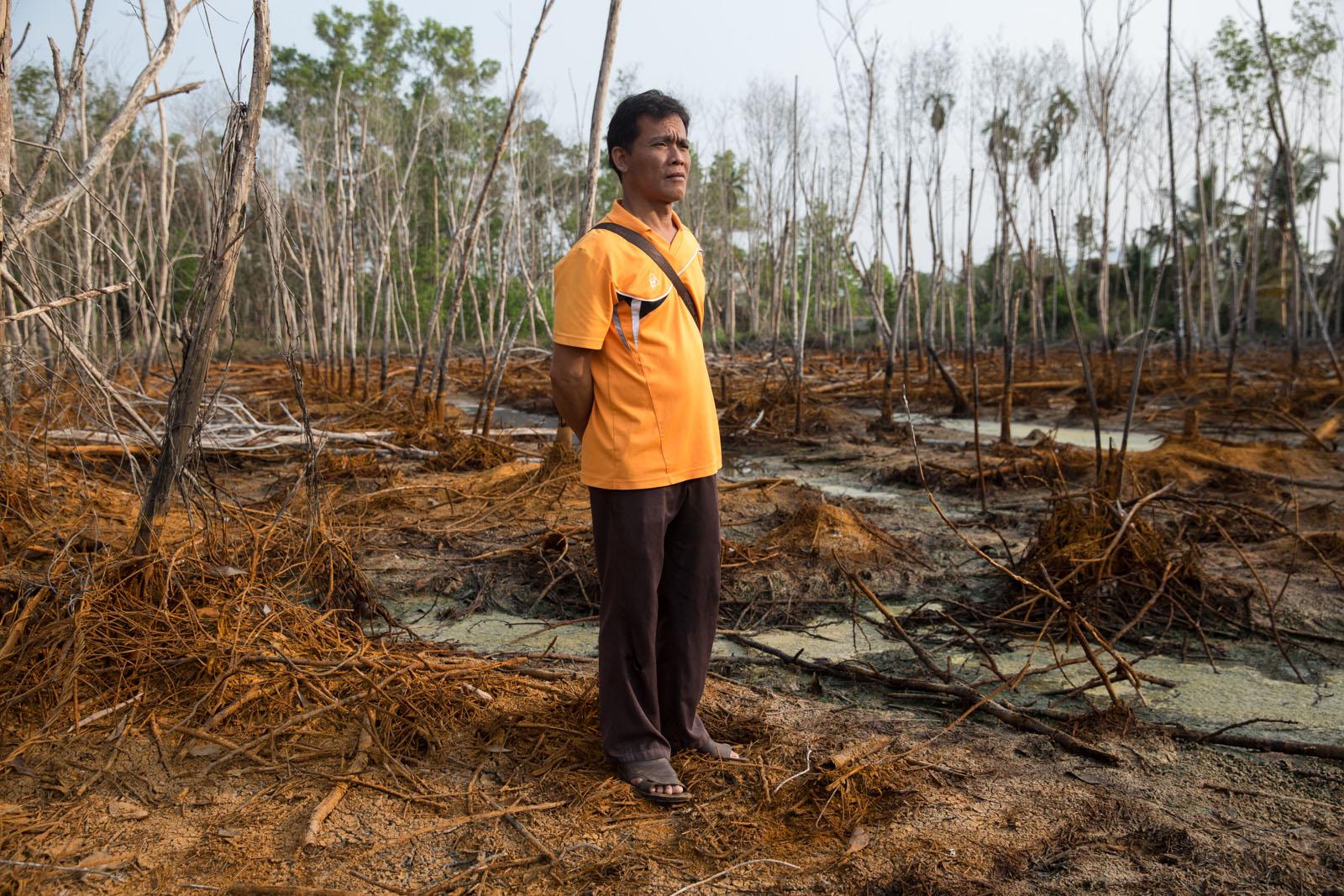 A villager stands on his neighbours polluted land caused by a recycling factory nearby. Rayong, Thailand. 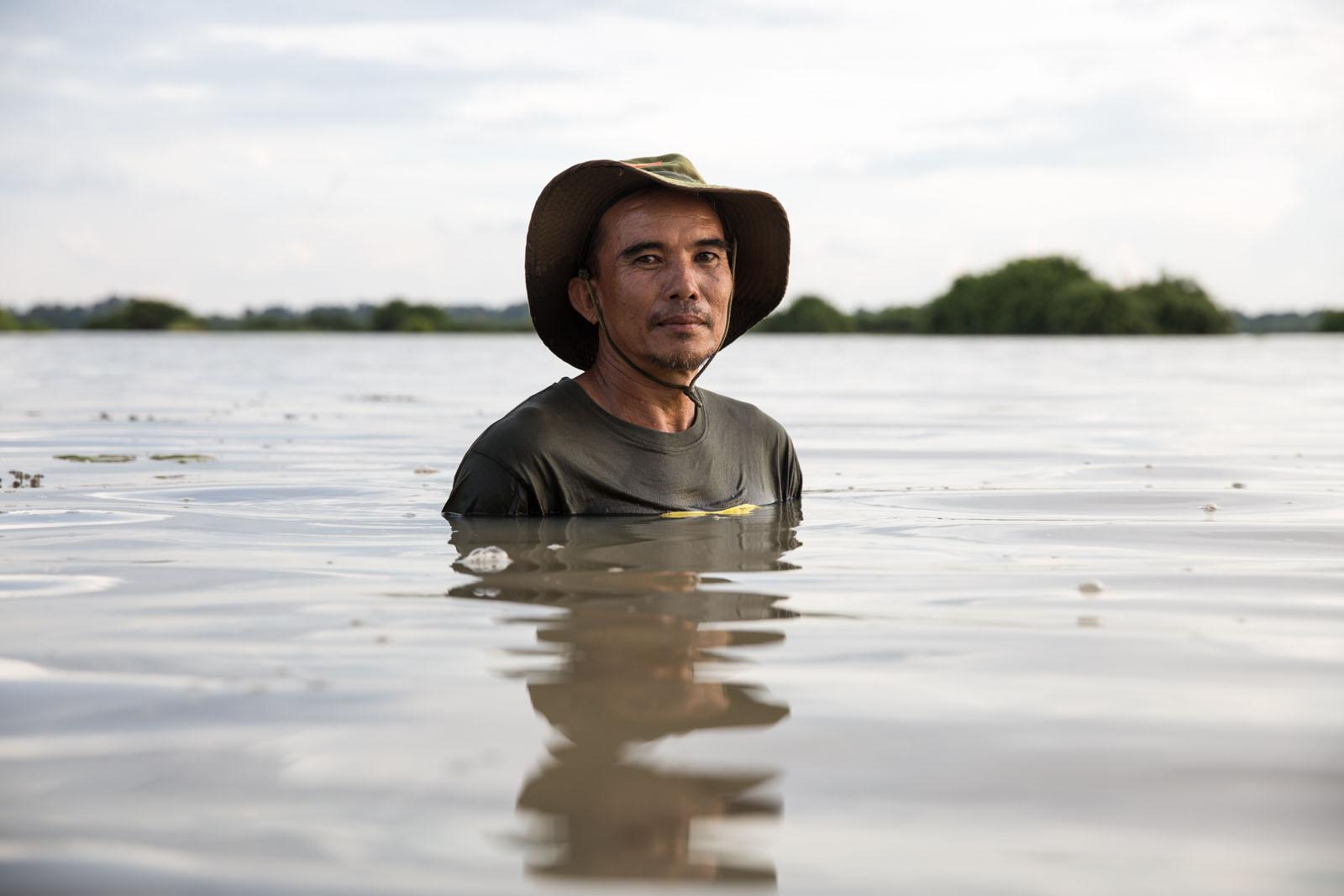 Apirat Suthawan, 54, is the village chief of Lao Dong village. "In 29 years the dam has not given us even the smallest bit of water to use!" he said. He also saw how the village became split between those for the dam and against and how some of the disagreements still effect relationships today. Rasi Salai, Thailand 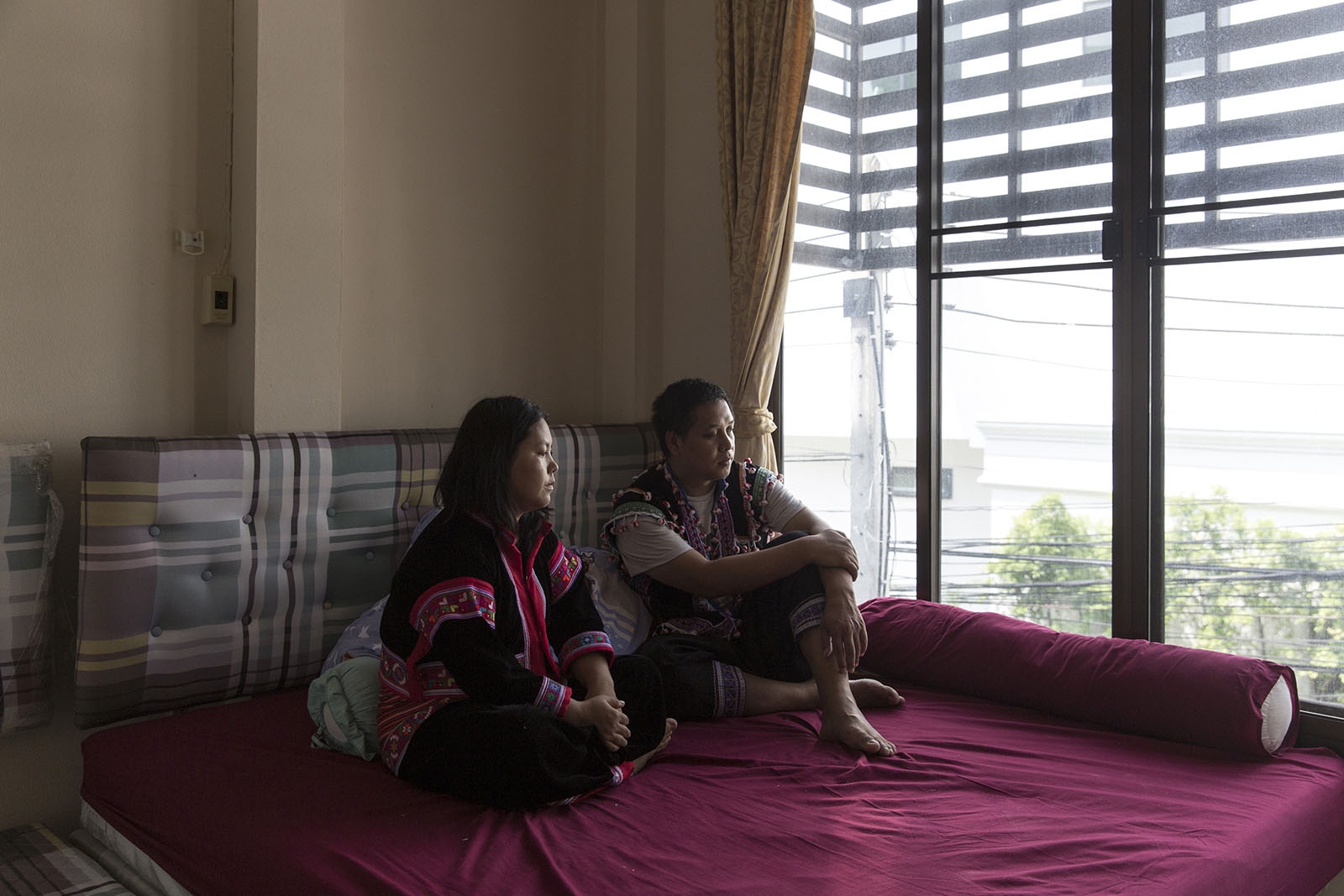 Maitree Chamroensuksakul (right) and Yuphin Saja (left) sit in a safe-house in northern Thailand. Maitre and his wife, including 2 small children have been living in 3 different safe houses since 2017 after the death of Chaiyaphum Pasae, their adopted son, for fears of reprisals during their fight for justice. Northern Thailand 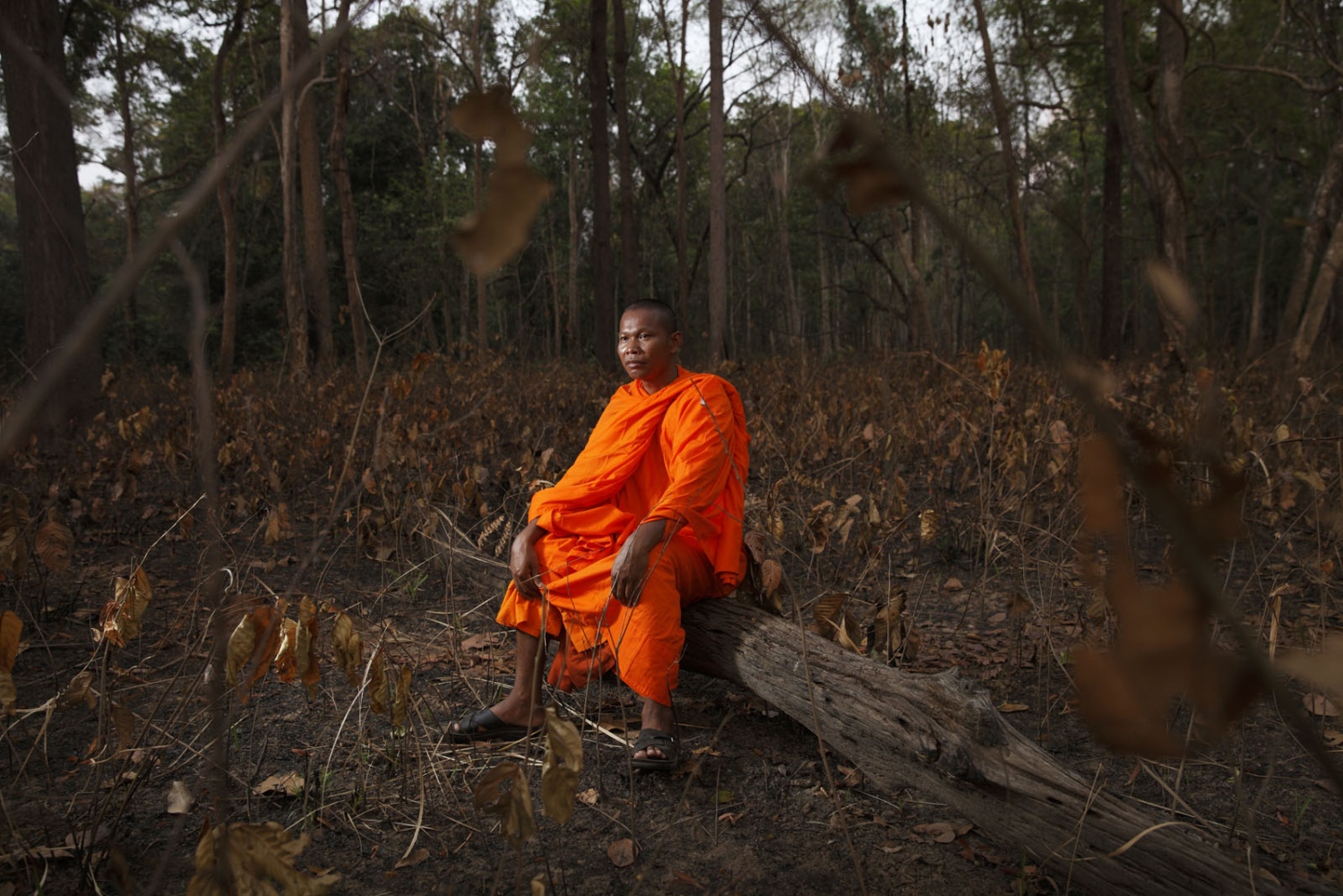 Bun Saluth in the Monks Community Forest that he protected from loggers, poachers and encroachment. This pioneer of the Buddhist environmental movement in Cambodia succeeded in 2002, despite having been threatened with his life, and was able to legally protect 18,261 hectares of evergreen forest now called the Monks Community Forest, which he still safeguards today. Cambodia 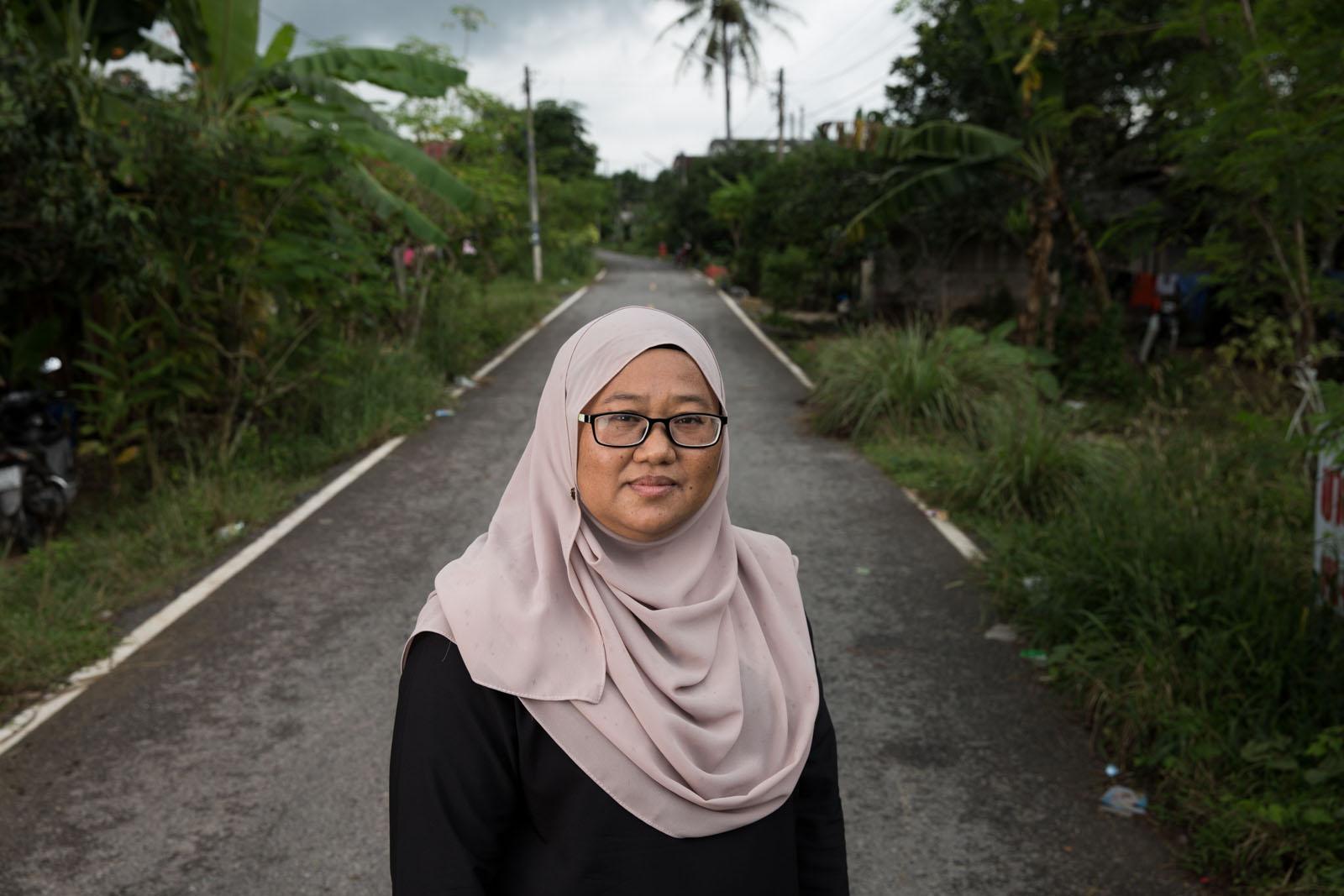 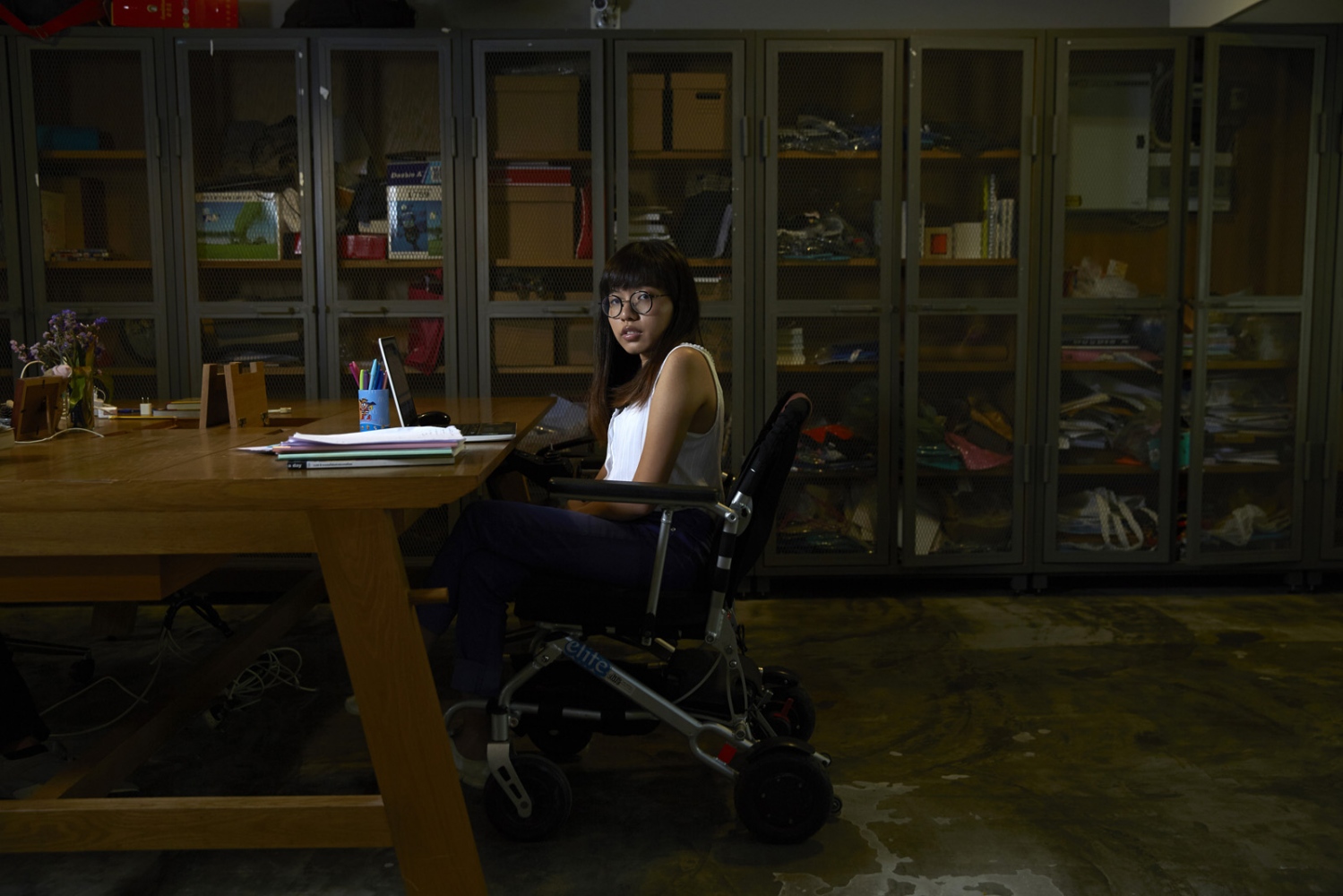 Nalutporn Krairiksh, a Thai journalist in the newsroom of Pratchatai News Agency. She has been physically disabled since she was born having to use a wheelchair and regularly reports on news the rights and issues of disabled members of Thai society. 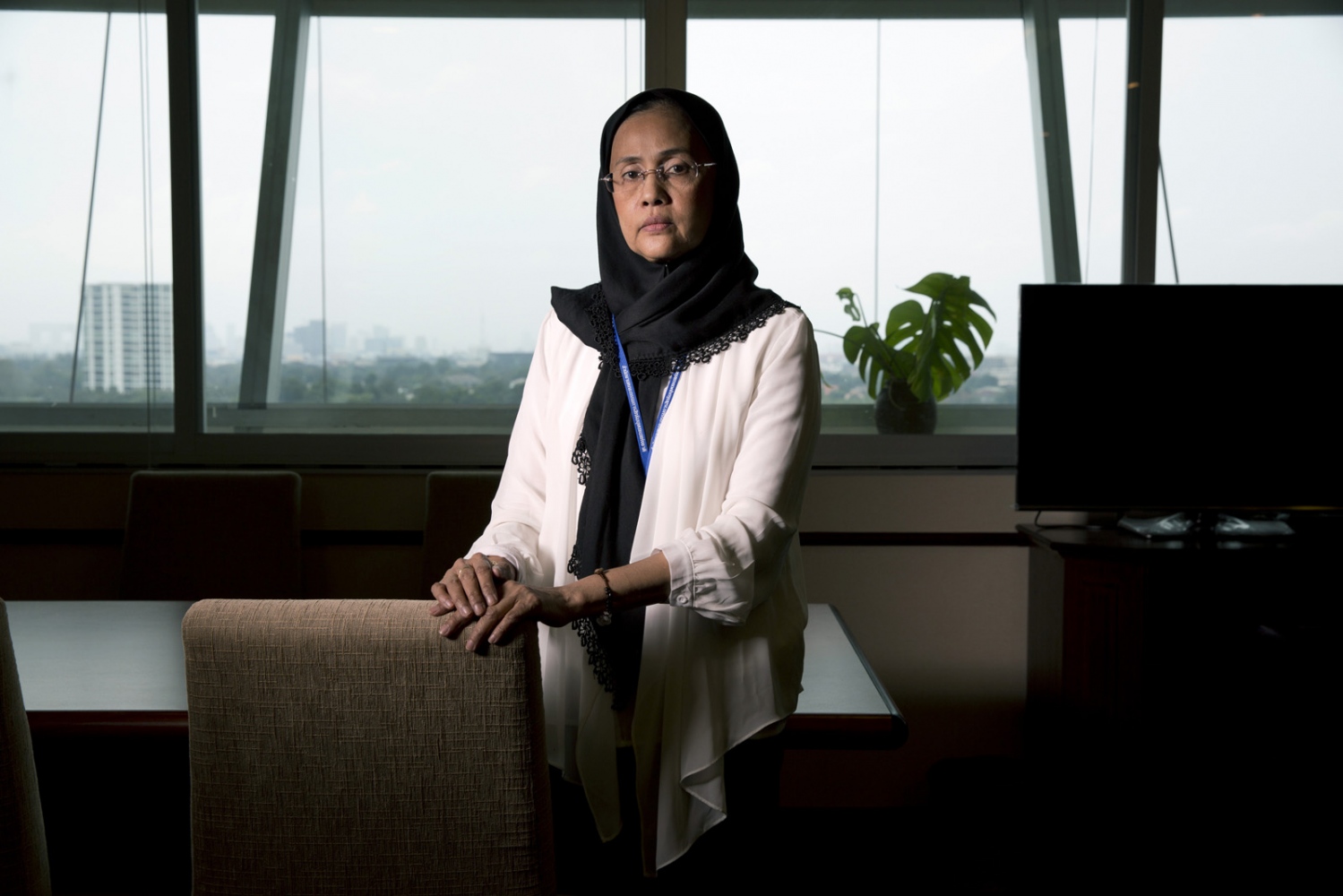 Angkhana Neelapaijit, Commissioner of Thailand’s Human Rights Commission, stands in her office in the sprawling Government complex at Chaeng Wattana in Bangkok. Before holding this position she fought her own personal battle to bring justice to her husband, Somchai Neelapaijit, who was abducted in Bangkok and never seen again. 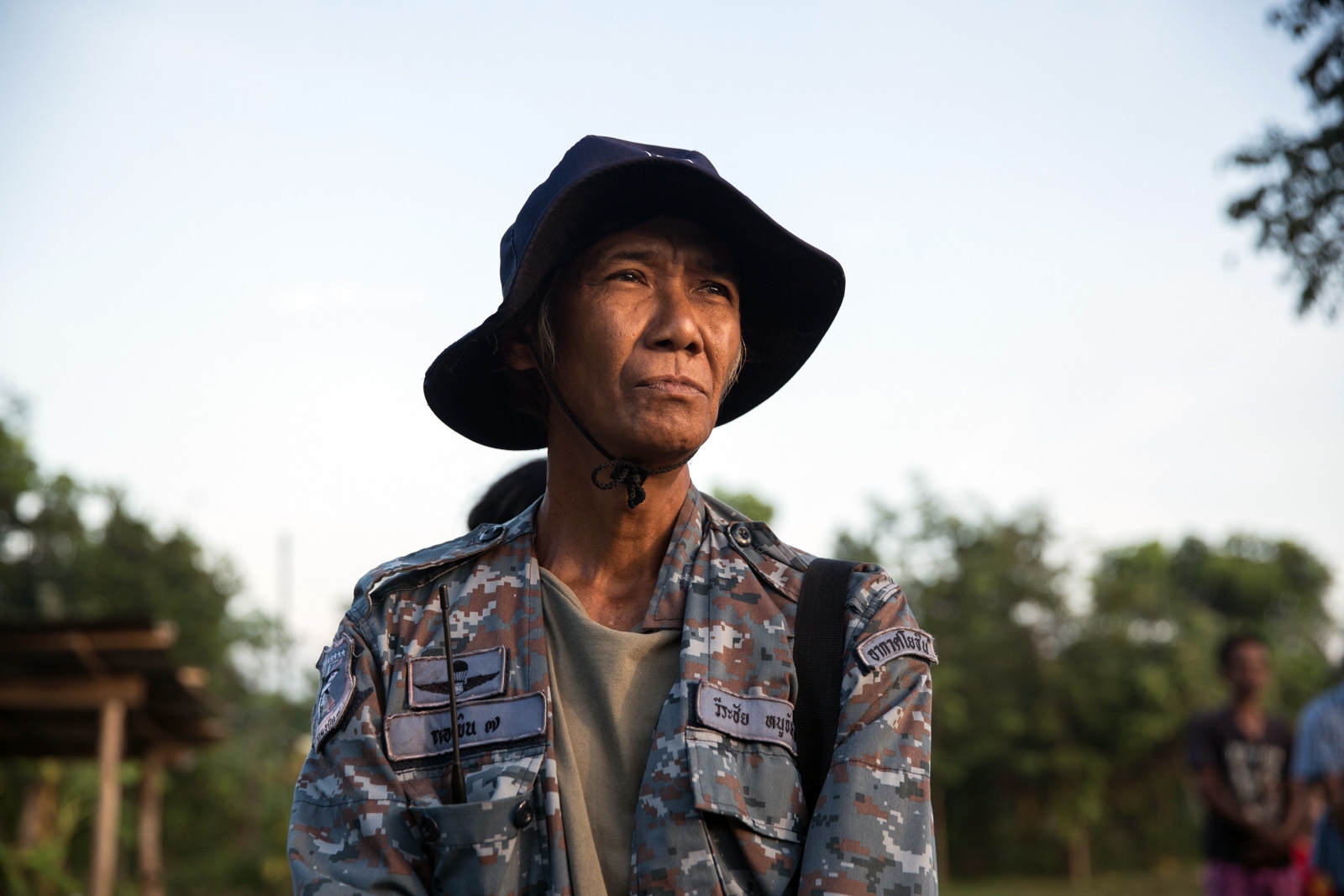 A community member of Klong Sai Pattana community stands in line during the morning role-call. The village is part of the Southern Peasant Federation of Thailand (SPFT) and has fought for a community land rights title for the last decade. Whilst the community is close to achieving its goal they remain alert and prepared for any eventuality having already seen 4 of their community members killed during their struggle. 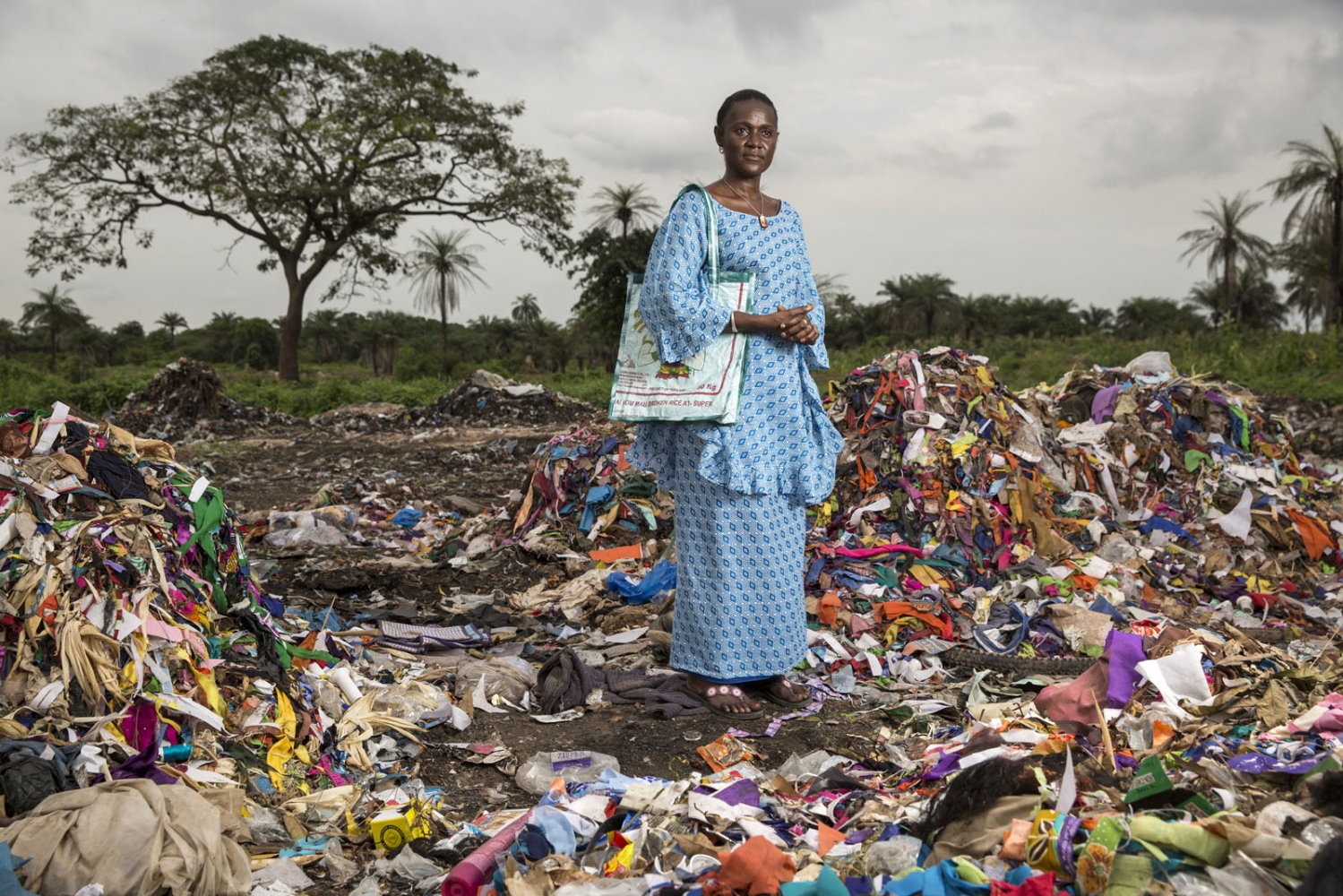 Isatou Ceesay stands at a waste dump in the town of Birkama. Mrs Ceesay founded the Women's Initiative Gambia in 1997. The organisation works with communities across the tiny west African state to address not only the environmental impact of unregulated waste disposal, particularly plastic, but also the empowerment of women in the make dominated society. Over one hundred women are now involved in Isatou's project. 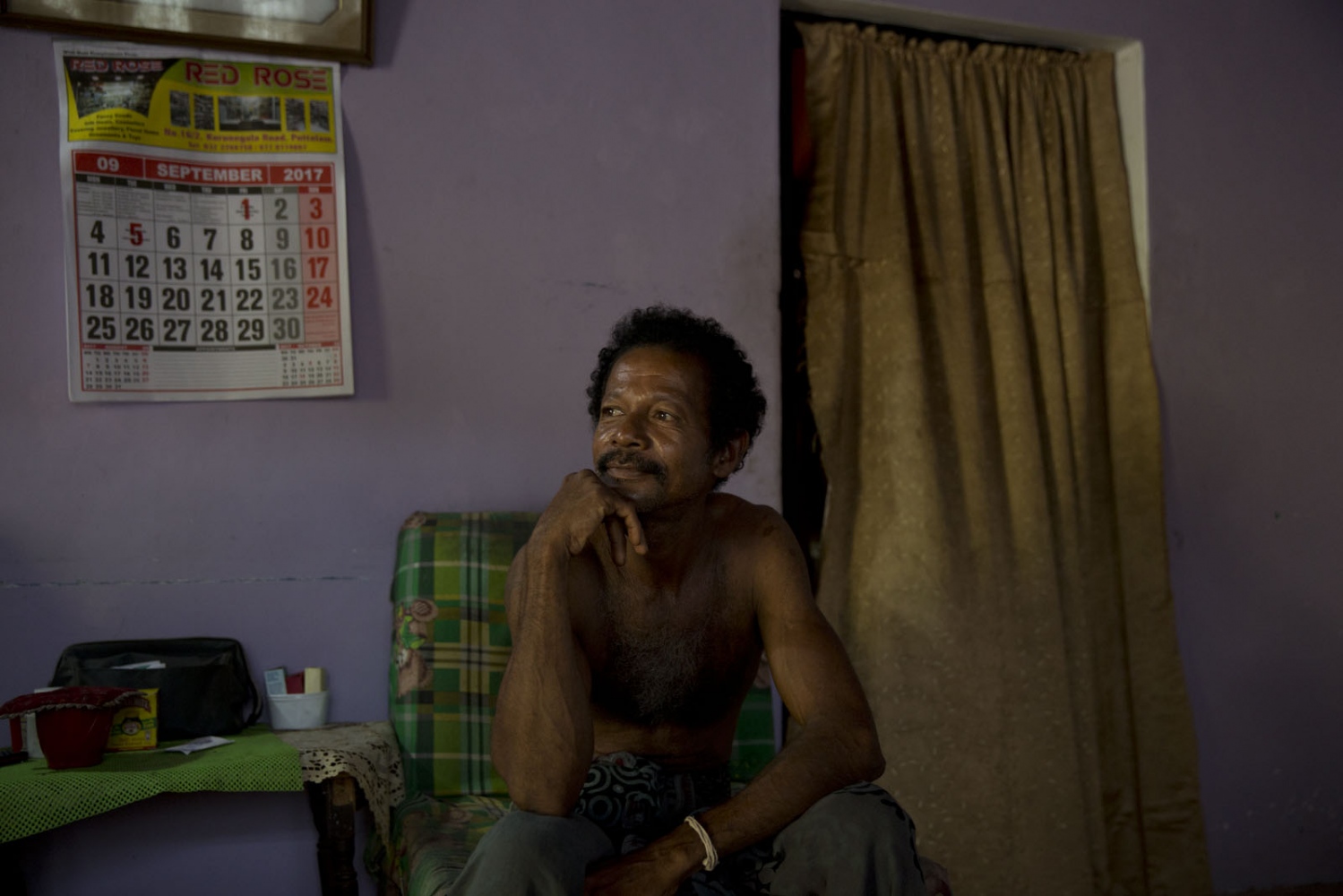 Johnson, an Afro-Sri Lankan, sits in the front room of his house in the Good Shed area of Puttalam town. Sri Lanka 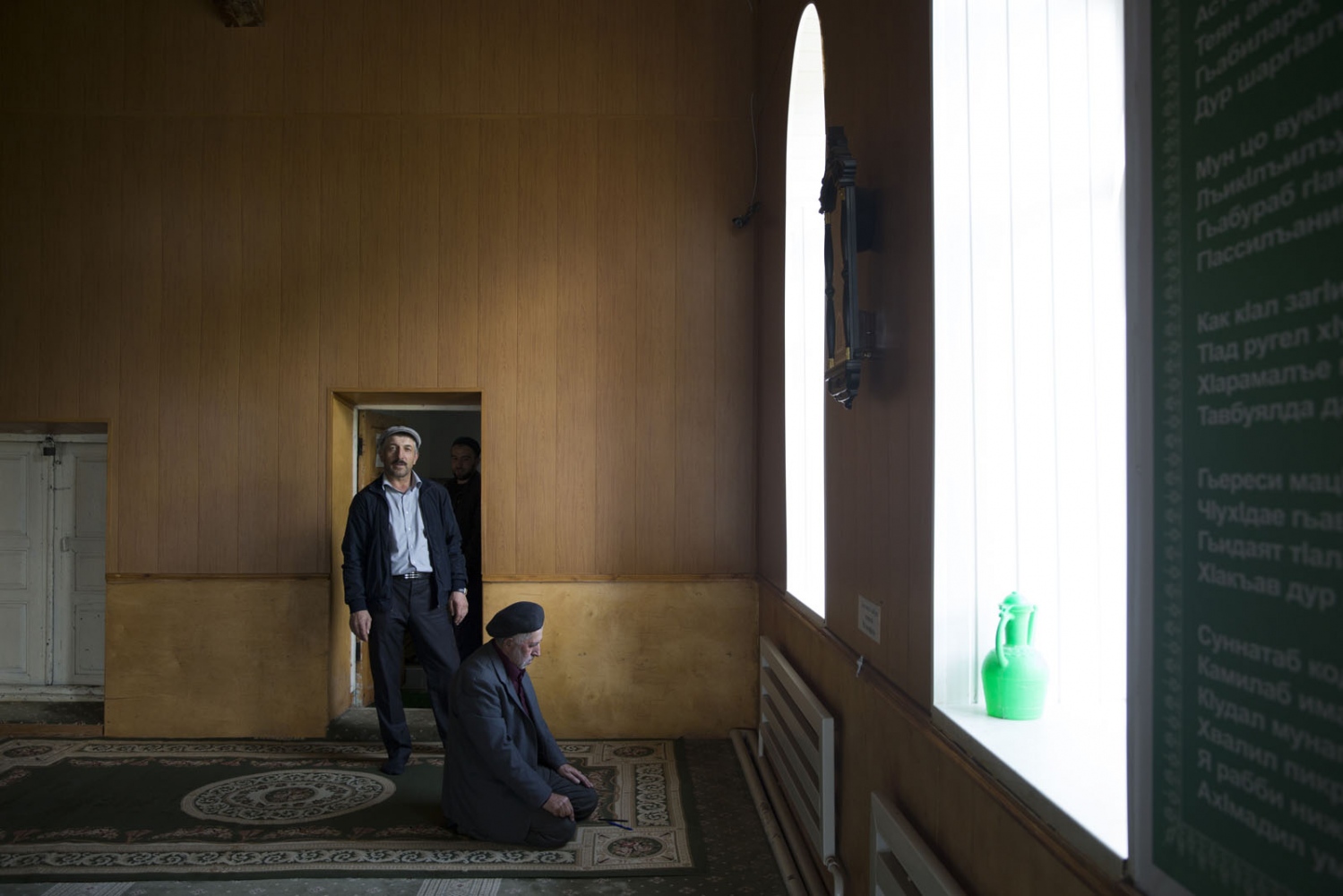 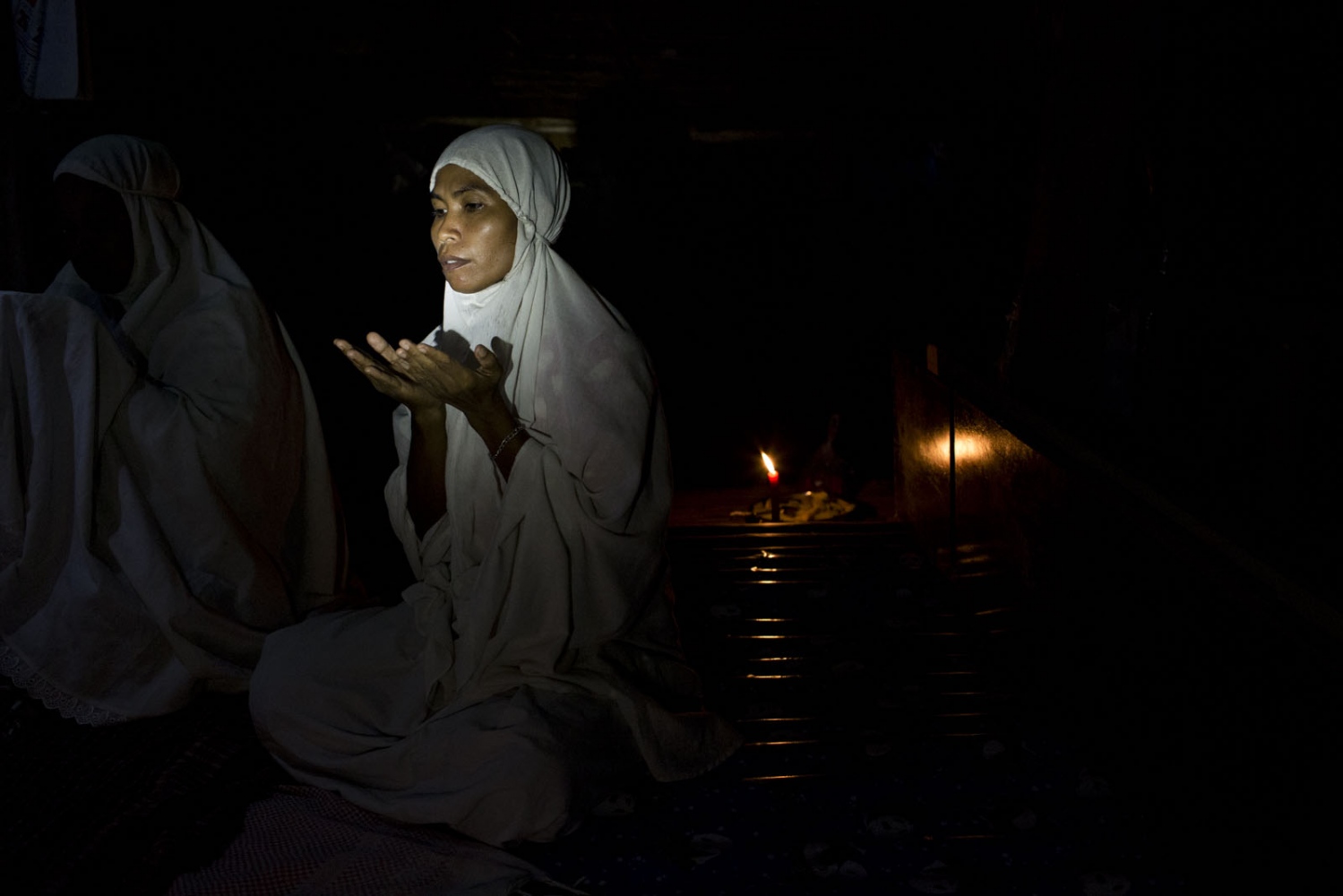 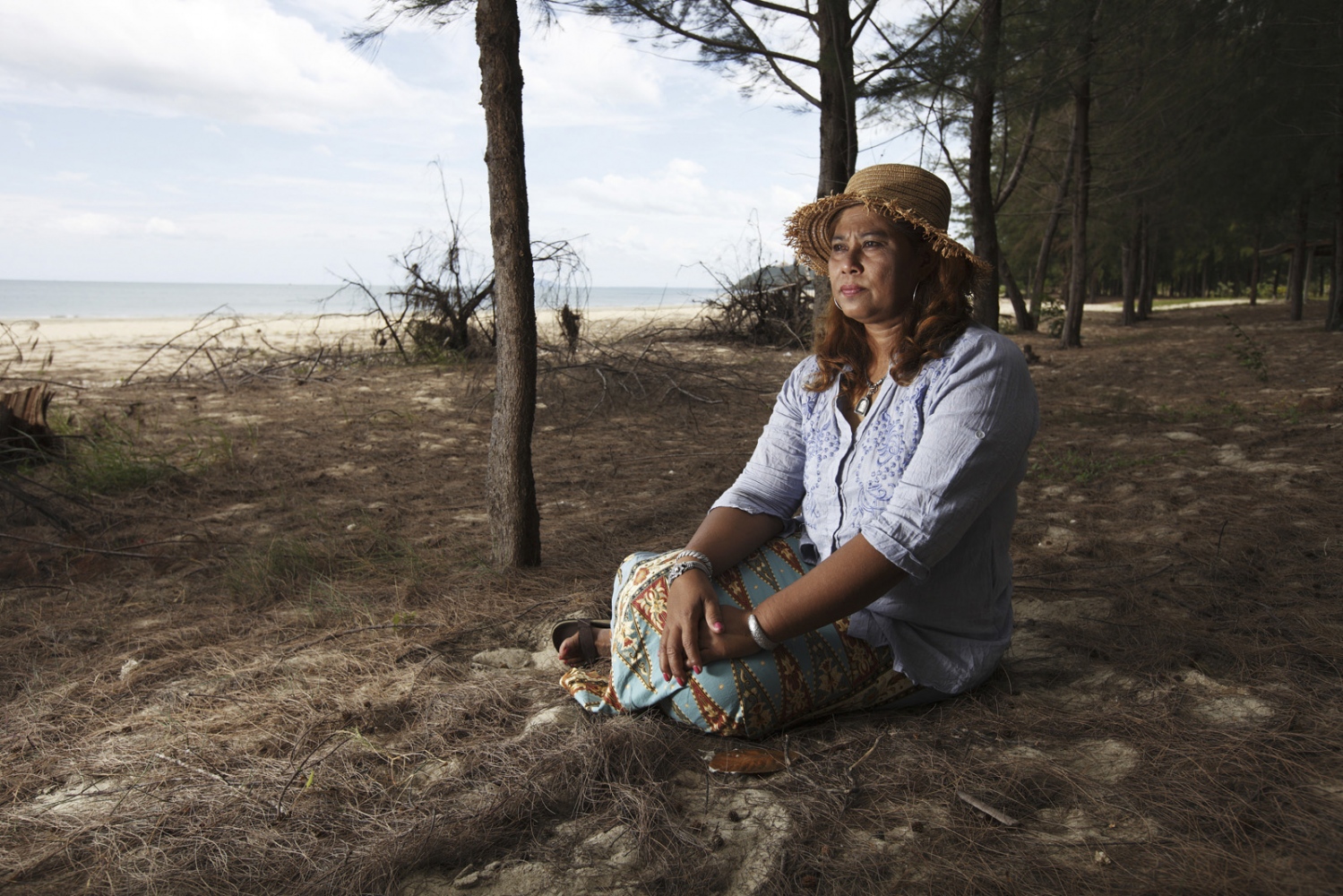 Jintana Kaewkhaw, a Thai environmental rights defender, stands on the coastline that was the proposed site for a coal-powered power plant. She successfully lead a protest group against a company that wanted to build a coal-powered electricity plant next to her village. Prachuap Kiri Khan, Thailand 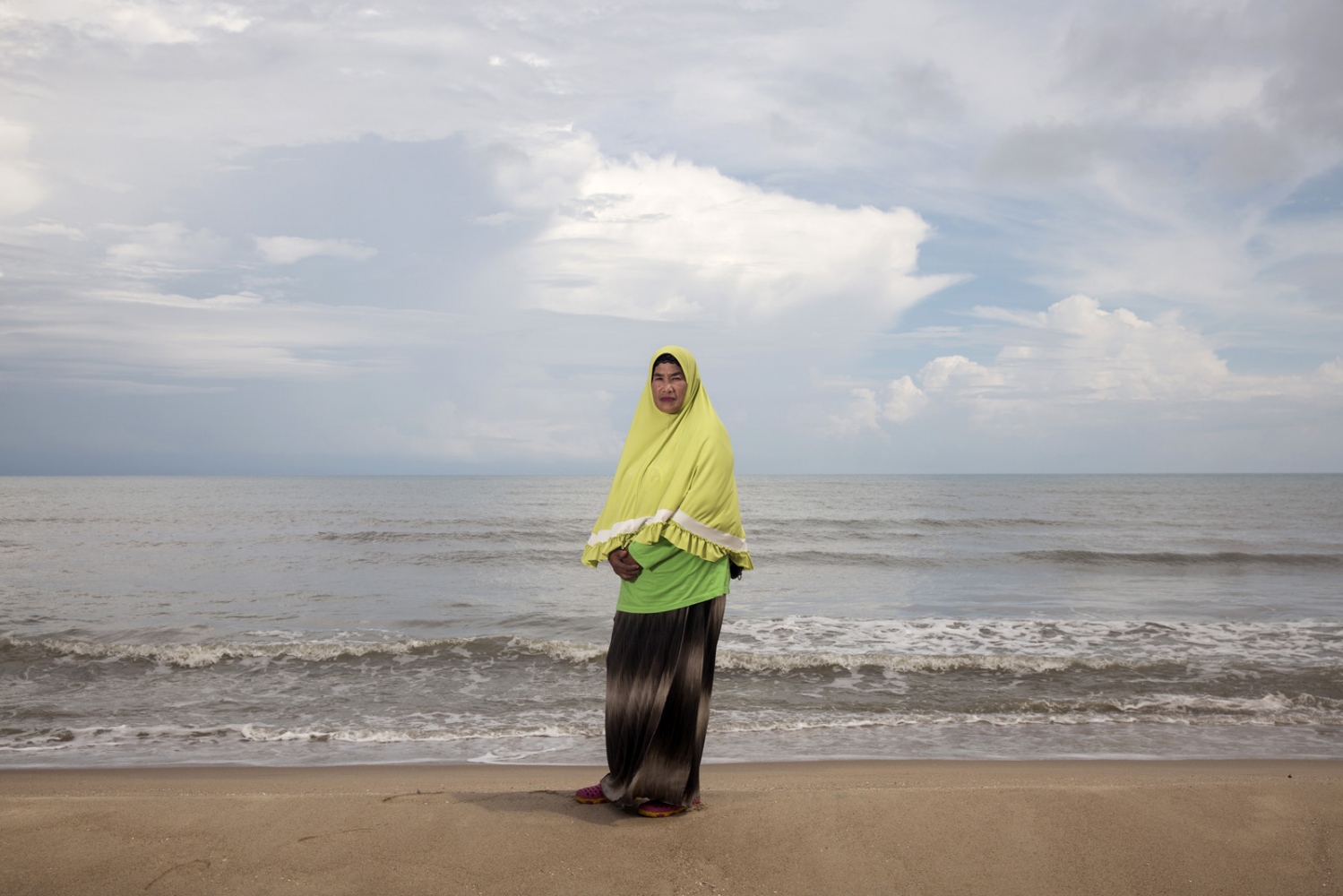 Rokeeyoh Sana-Ae stands on the beach located next to her community in the Tae Pa District of Songklah Province. Where she stands is the proposed site for a coal-powered power plant which the community vigorously opposes saying it will destroy the natural habitat of the area and their community. Songklah, Thailand 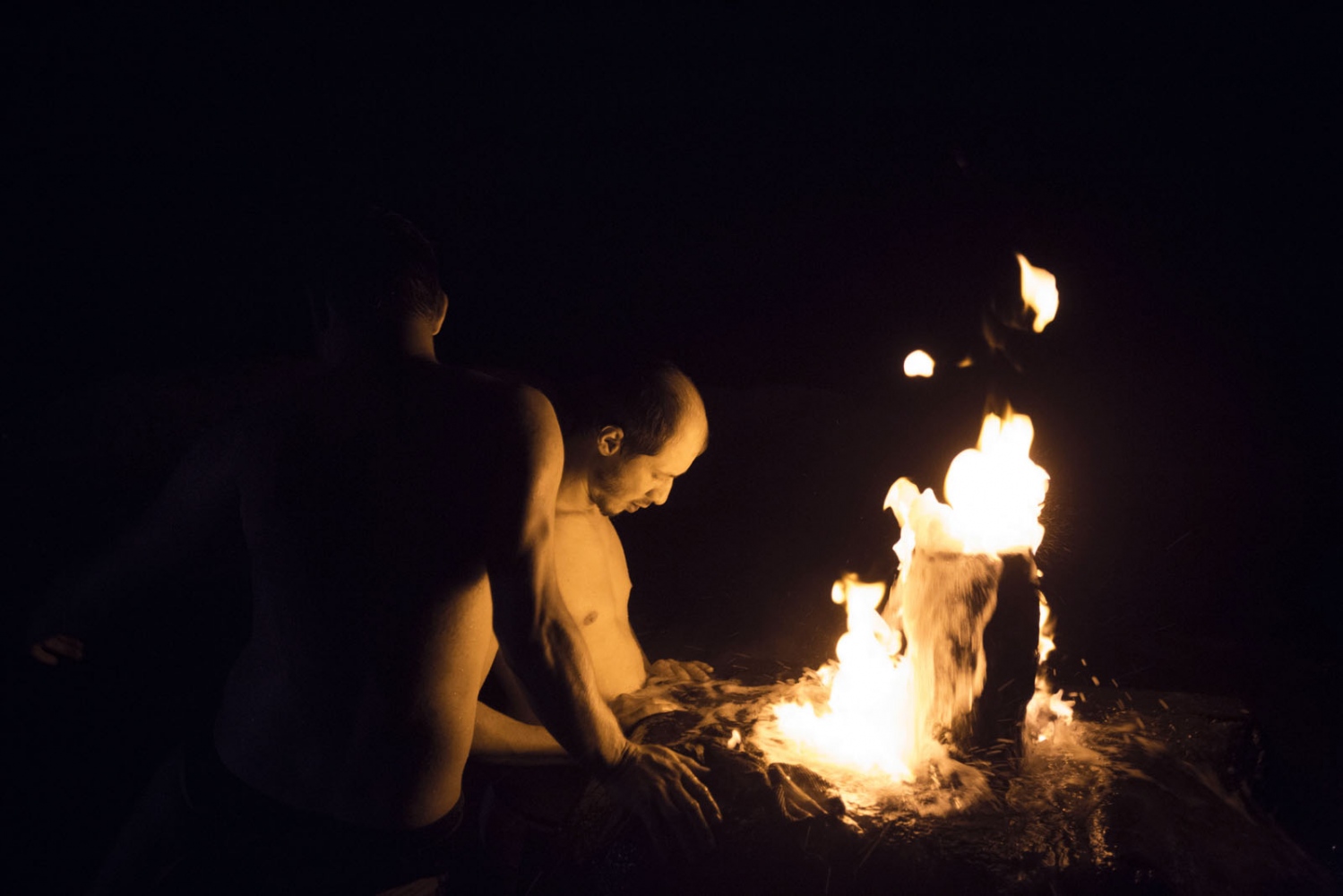 After a party, young Dagestani men visit a hot springs in the middle of no-where which has a flammable fountain of water. 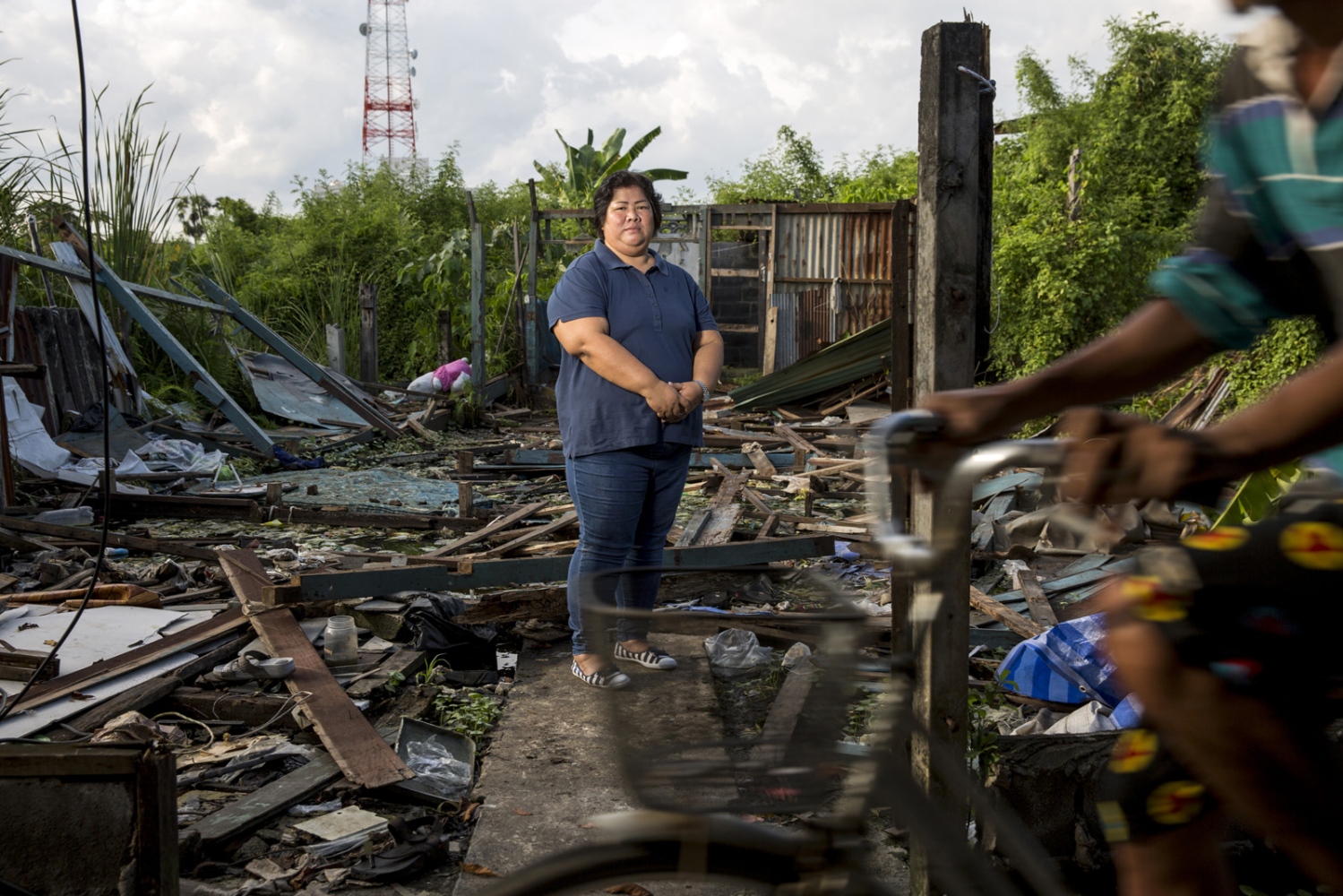 Nutchanart Thanthong stands in the remains of a destroyed house in the small slum community fighting forced evictions. For over 20 years she has assisted communities in and around Bangkok who are facing eviction. Samut Prakan, Thailand 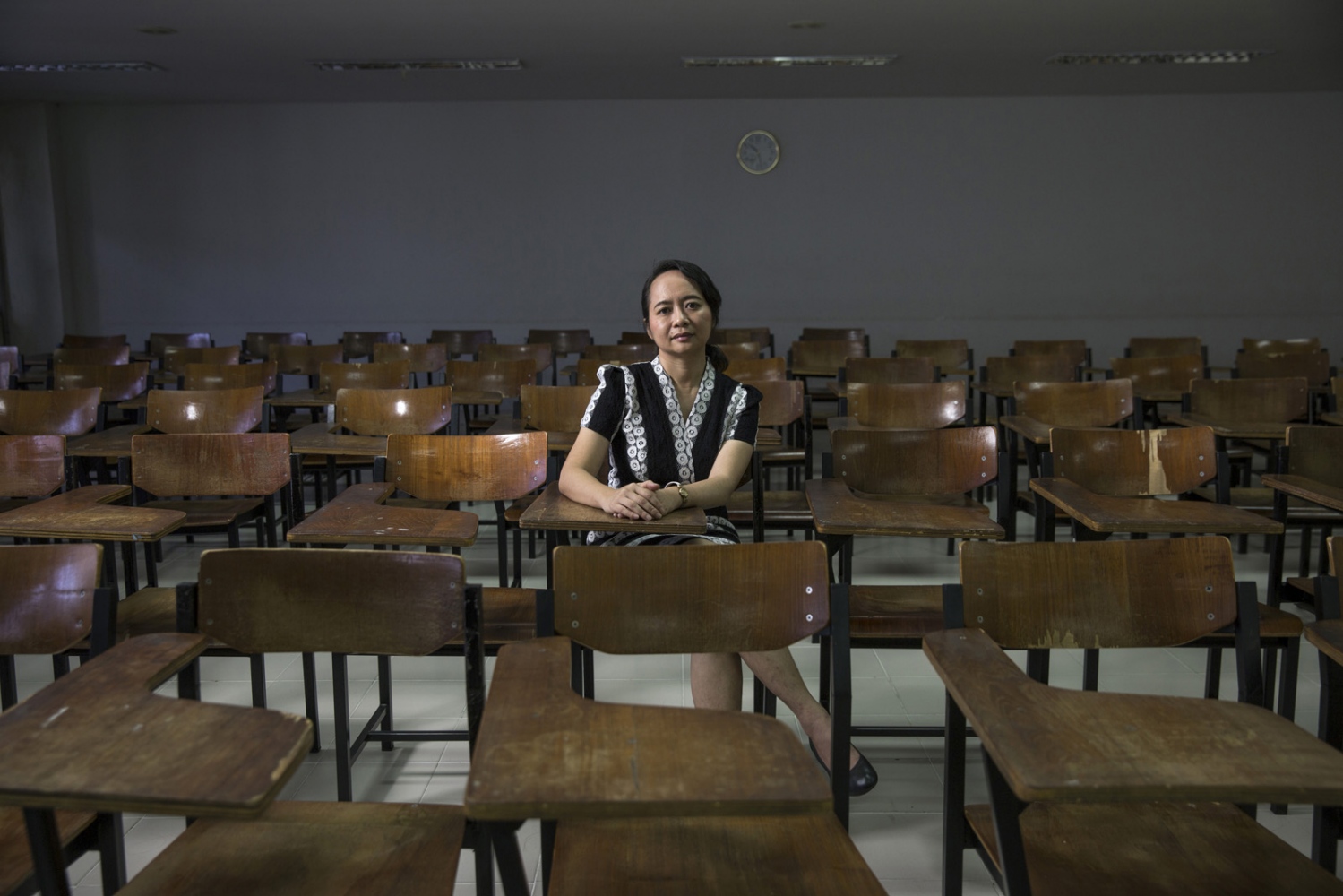 Chalita Bundhuwong, in one of her lecture rooms at Kasetsart University, where she is a professor of Social Science. She has been part of an effort to organize public discussions, lectures and lead campaigns to assist students in understanding the concept of human rights. She is also the Coordinator of the Academic Network for Civil Rights (TANC). Bangkok, Thailand 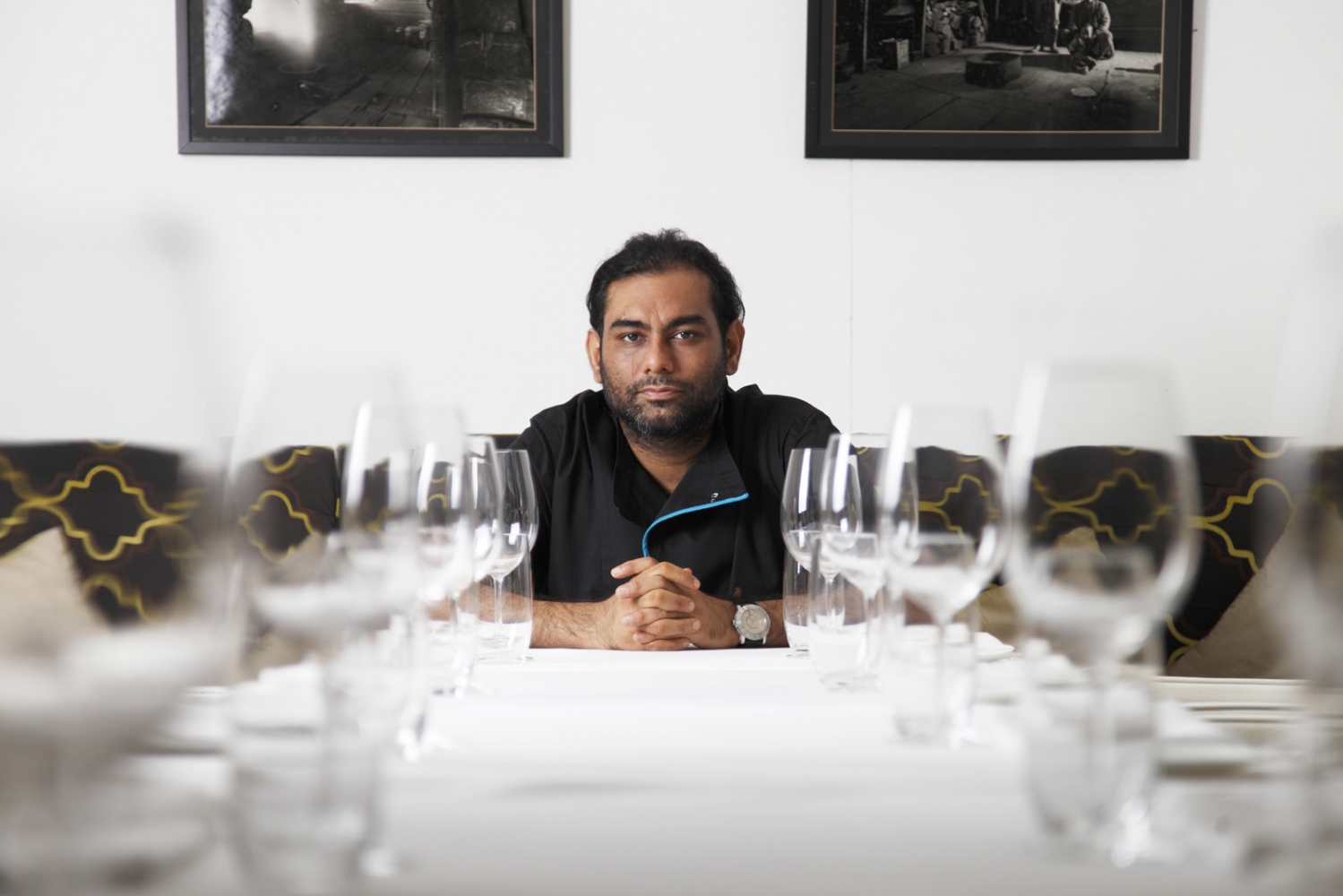 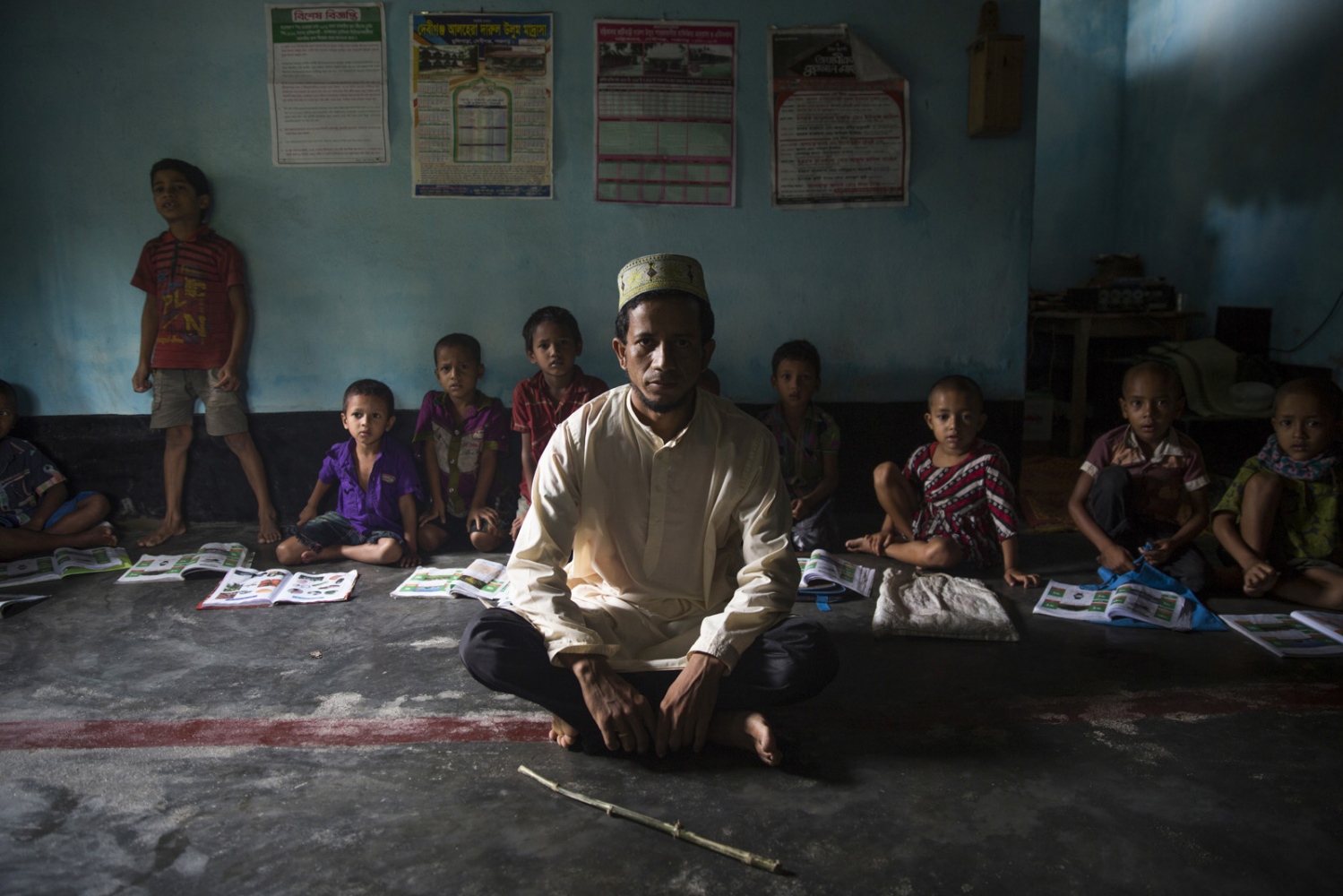 In Maja Para village in the Dhoholakhagrabari enclave young students and their teacher sit in class of a madrassa. Because enclave children have a difficult time accessing the education system in Bangladesh the locals of this enclave formed an Islamic Foundation funded on donations and built this school to give their children some form of education. Bangladesh 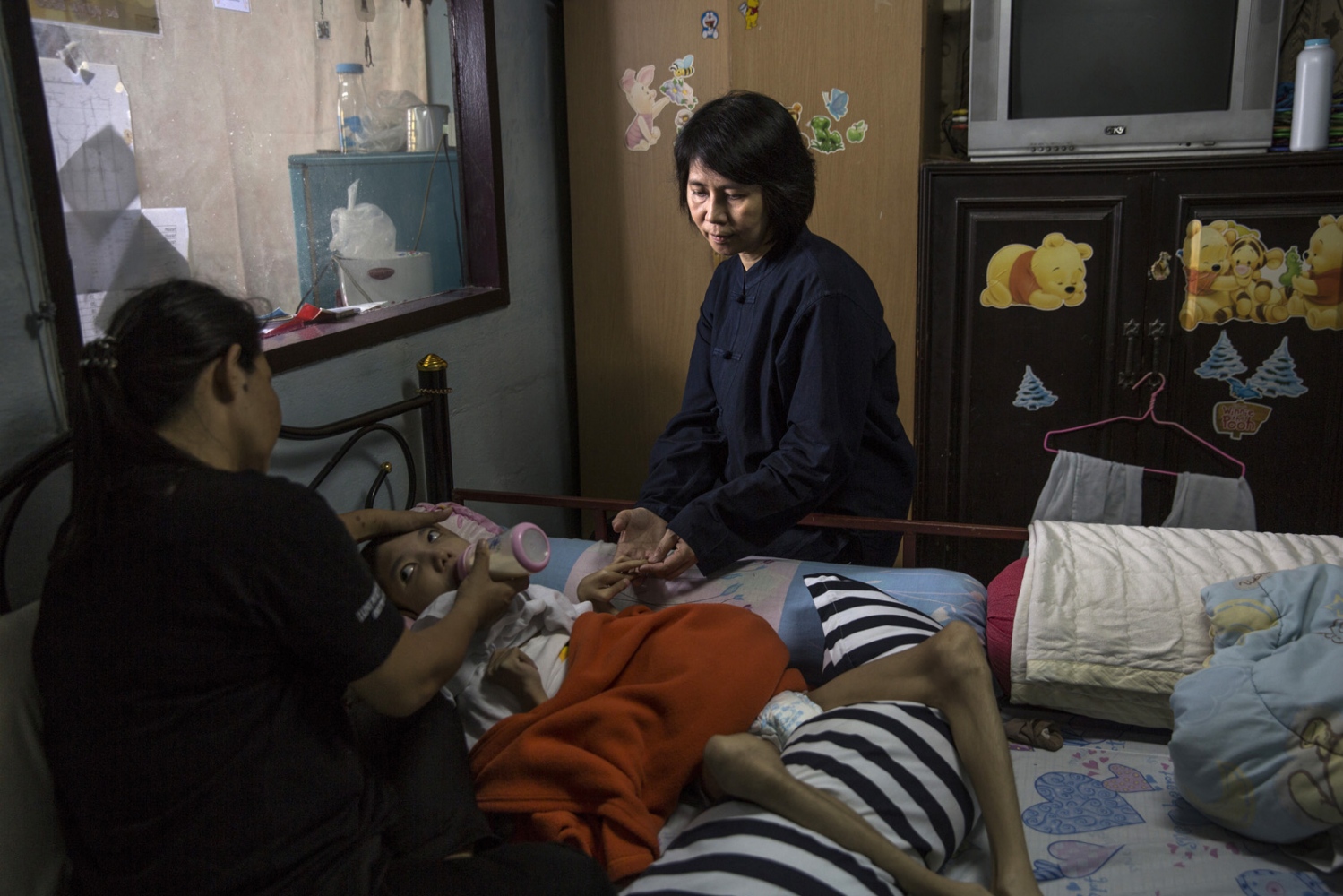 Preeyanan Lorsermvattana sits in the bedroom of a mother and son whom she assisted in receiving compensation after a hospital doctor injected the pregnant mother with a drug that led to the child being born severely mentally and physically disabled. Now 9 years old she continues to help the family. Bangkok, Thailand 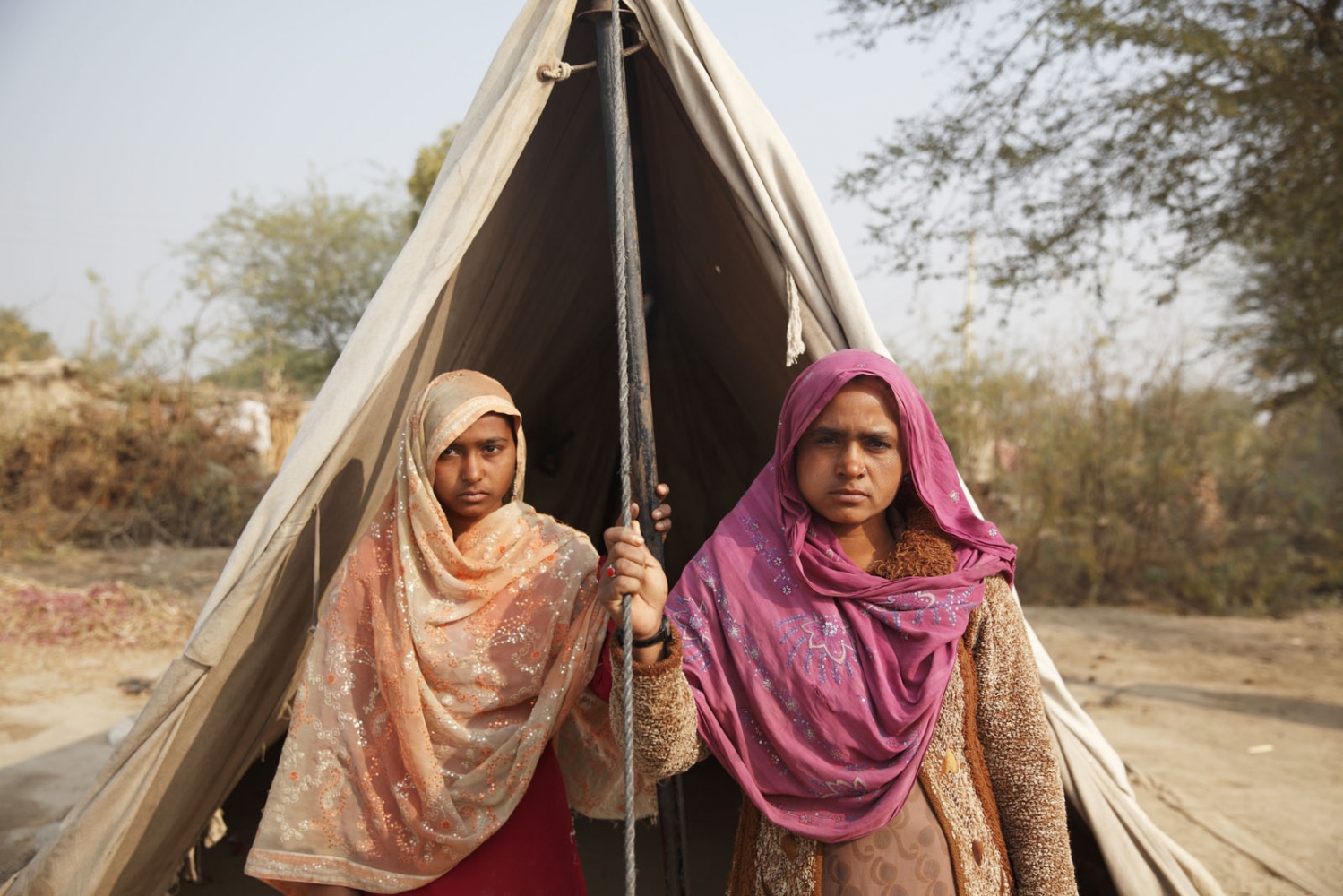 A mother and daughter, recently rescued by the NGO, temparerily sleep in a tent until they have time and money to built a solid house. Following the release of the Global Slavery Index by the Walk Free Foundation Pakistan is ranked 3rd worse in the world behind India and China. 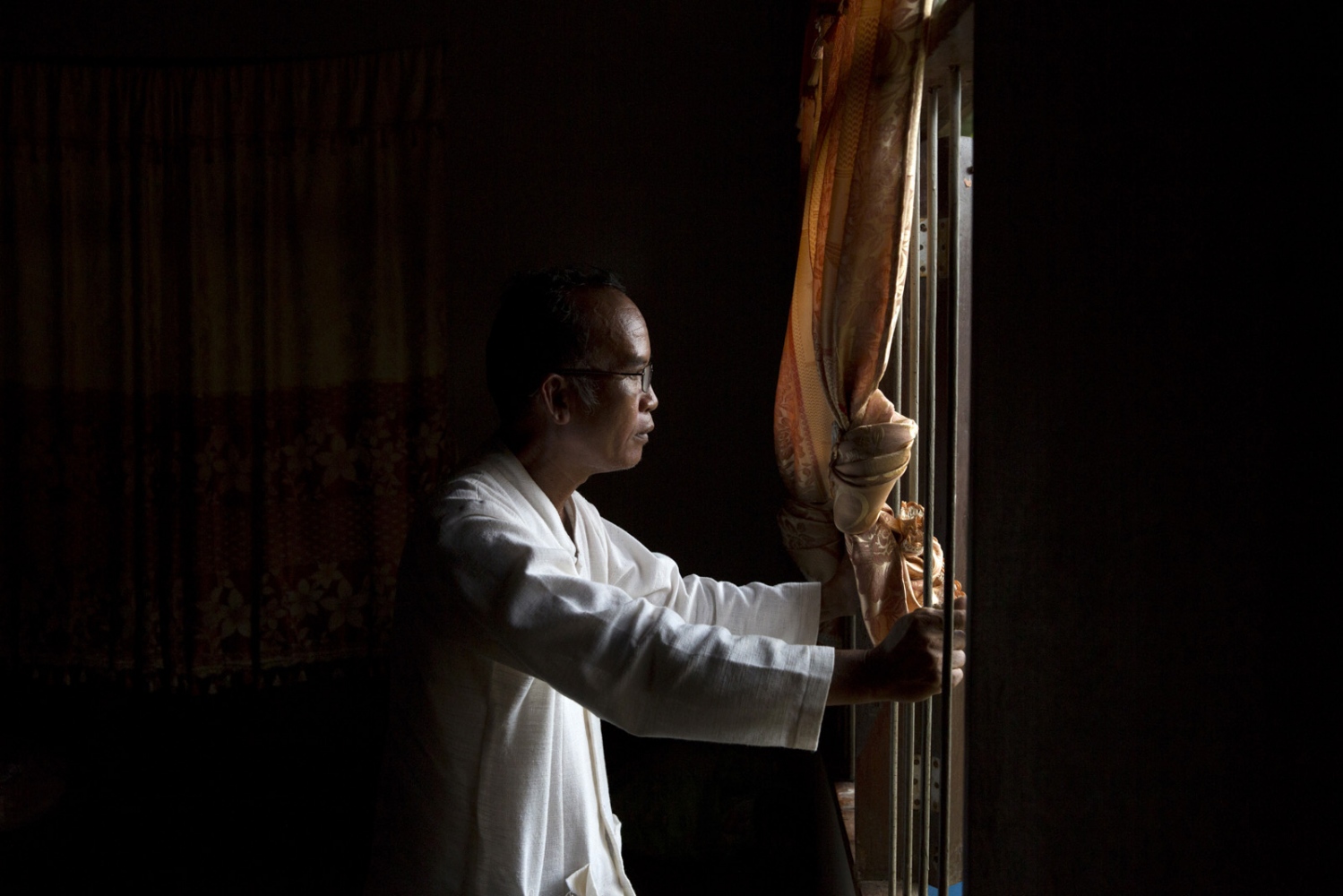 Por Sakmi looks out of a house in his village of Na Nong Bong. One of the complaints by the villages was that a gold mine allegedly poisoned certain rice fields and water sources due to waste run-off that is full of contaminants such as arsenic and cyanide.Loei - Thailand 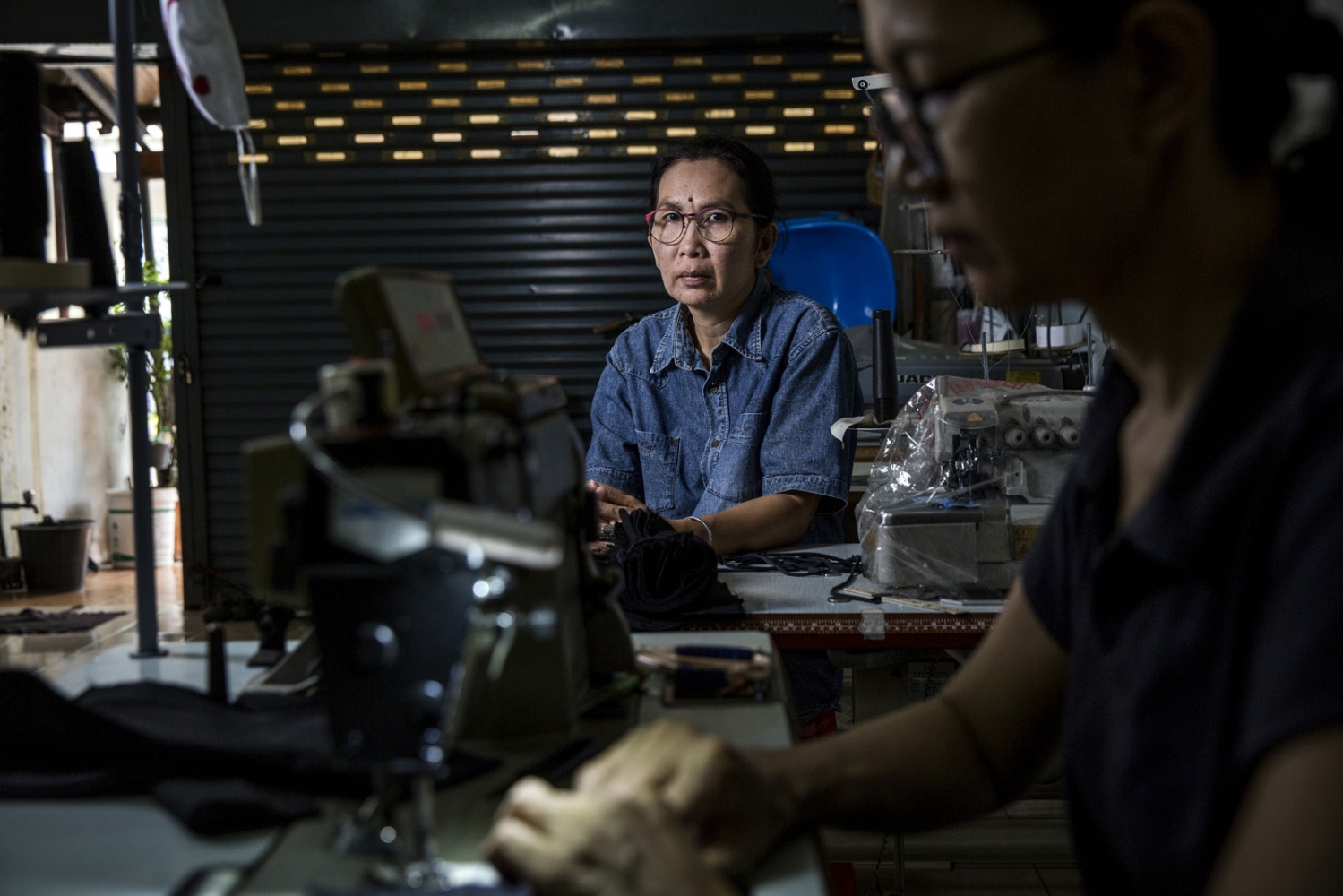 Sriprai Nonsee, a workers union leader sits in a small sewing factory in the Rangsit area of Northern Bangkok. She relentlessly fights for the rights of factory workers who are treated unfairly by their employers. 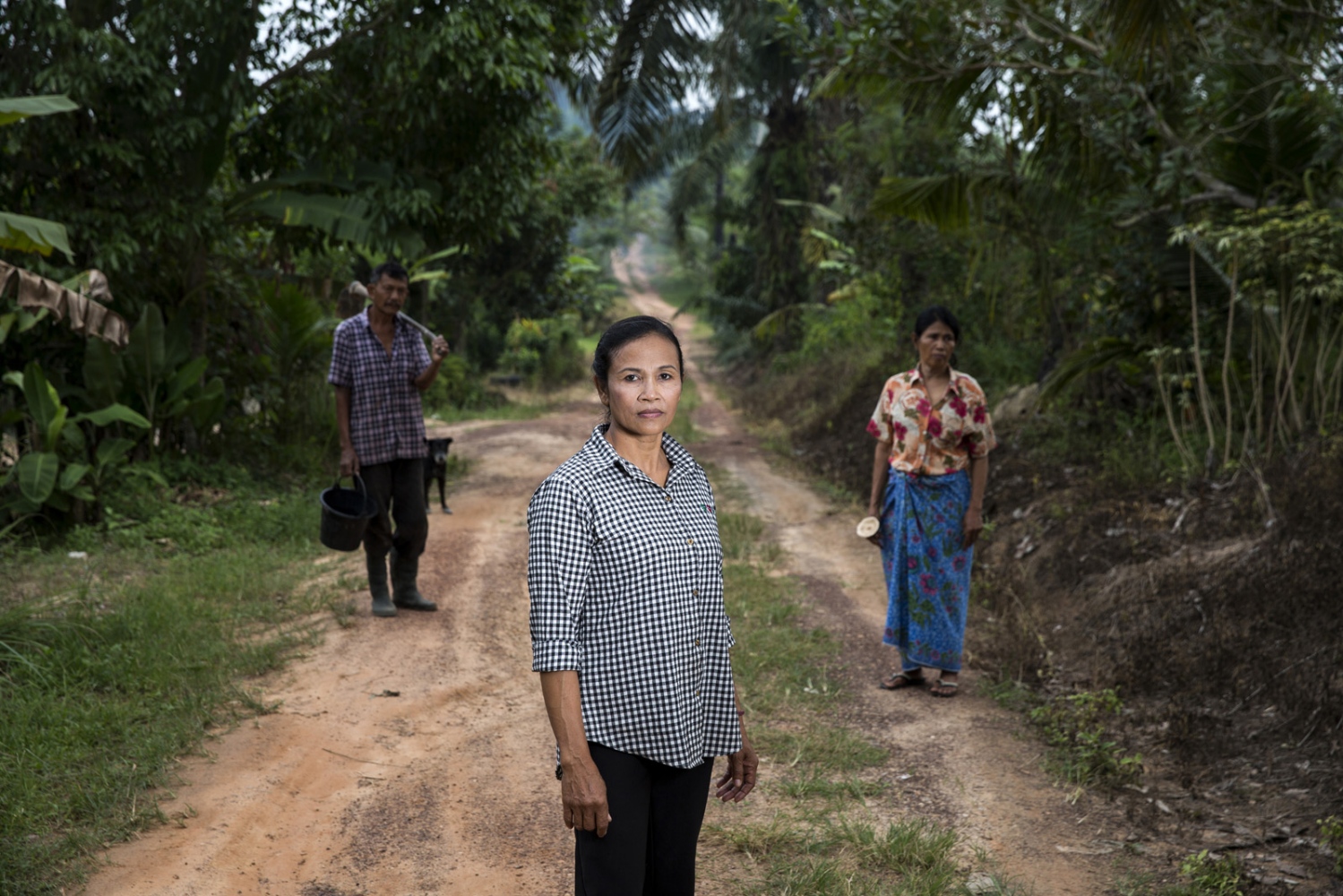 Asane Rodphol stands on the track that runs through her community of Nam Daeng in Surat Thani Province. Behind her stands other members of the community which is supported by the Southern Peasants Federation of Thailand as it faces legal threats and eviction.